The Et Cetera • May 3, 2022 • https://eastfieldnews.com/25144/top-news/board-of-trustees-candidates-present-conflicting-vision/ 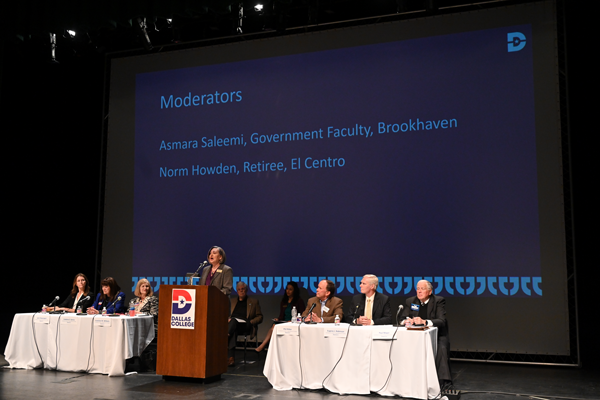 Candidates for the Dallas College Board of Trustees gather at the Brookhaven Campus’ performance hall. They discussed current issues and what actions should be taken in front of a live audience on April 19. Photo by Rory Moore/The Et Cetera

Dallas resident Bob Burns came to the Brookhaven Dallas College Board of Trustees candidate forum with several questions. He wants to support the candidate who would be best for Dallas College, but he said he’s not sure who the best candidate is.

“We’re hearing so many conflicting stories,” Burns said. “We just wanted to get everybody in one room and see if we could make a decision of who’s telling us the truth.”

Candidates for Dallas College Board of Trustees districts 1, 2, 3 and 4 are running for election May 7.

In District 1, incumbent Gretchen Williams is defending her seat against Lynn Davenport and Catalina Garcia.

District 2 incumbent Phil Ritter is defending his seat against Eugene Robinson. In District 3, incumbent Dorothy Zimmermann is stepping down, leaving an opening for Soji John and Paul Mayer to compete for.

All the candidates, with the exception of John and Lira Bravo, answered questions at public forums held at Richland on April 11 and Brookhaven on April 19.

Burns said the candidates’ statements about what is happening at Dallas College conflict with each other.

One point of contention among the candidates is the consolidation into one college. Incumbents Ritter and Williams insist the merger saved the college millions of dollars and was a positive change.

“It’s one that will put us in the future and make us one of the best systems in the country,” Williams said.

Davenport and Robinson say it was a complete failure which cost the college $18 million in consulting fees and another $12 million in payments
to staff who were laid off.

“I don’t understand how you can justify the decrease in students [and] increase in spending,” Davenport said. “And where’s the fruit?”

“That is putting the cart before the horse where the students are really not getting what they need in K-12,” Davenport said. “So then they’re having to be remediated at the college level.”

Robinson, a former Dallas College employee and adjunct professor, claims the reason he was laid off in 2014 and his program dissolved was to make funds available for early college high school programs.

Ritter said that is false.

“The suggestion that money was taken from his bucket . . . to fund early college, it’s just not true,” Ritter said.

“I think it would be a travesty to the kids of DISD if there were any efforts made to unwind that partnership,” Marshall said in a phone interview.

There are also major differences in how the candidates view diversity on Dallas College campuses.

“We’re all different people and that’s what makes the world interesting,” Williams said. “But we all need to be included, and we work very hard to train people to include people.”

In response to what he would do to make the college more inclusive, Robinson said his greatest concern was the disappearance of white students from the campuses.

“Where did those white students go? That’s my question,” Robinson said. “You talk about diversity, equity, inclusion — how much more diversity can you get? One hundred percent non-white? Is that inclusion?”

The candidates also have radically different approaches to how they would work with the current structure and administration of Dallas College if elected.

District 3 candidate Mayer said he has close friends among the administration and would support the chancellor in his efforts to make Dallas College a premiere workplace.

“Having a trusting relationship based on a mutual understanding of the direction of Dallas College that is founded on measurable goals is the kind of support I mean,” Mayer said in a candidate survey.

Robinson said he would get rid of the current Dallas College administration.

“They’ve all got to go,” Robinson said. “And somebody who’s really interested in education needs to be brought in as the chancellor.”

Marshall said the best scenario would be for the incumbents to win.

“I’m hopeful that both of them prevail in their contests and that we can continue on this positive trajectory of partnering together for the benefit of kids,” Marshall said.

At the end of the forum, Burns said he didn’t find the conclusive answers he was hoping for.

“Well, there’s another forum tomorrow that I’m going to go to,” he said.