The Et Cetera • May 3, 2022 • https://eastfieldnews.com/25136/news/neave-criado-investigates-sexual-assault-cases/ 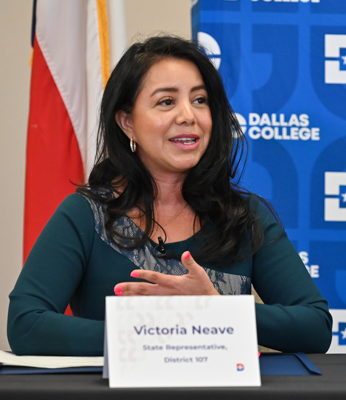 State Representative Victoria Neave Criado was on a door-to-door campaign to contact her constituents personally and find issues to bring to the house floor.

Eventually, she came to the doorstep of Lavinia Masters, a 50-year old woman with a rape kit that stood untested for 20 years.

“[Masters] told her story and never gave up trying to figure out what happened with that evidence,” Neave Criado said.

Neave Criado spearheaded the Lavinia Masters Act, a bill ordering Texas to clear the backlog of rape kits. Although the bill passed with minimal pushback from state lawmakers and representatives, the resources needed to accomplish Neave’s ambitions were daunting.

According to a press release by Neave Criado, over 80% of backlogged rape kits in Texas have been resolved since the passage of the Lavinia Masters Act. The bill’s success depended on $50 million in funding and reforming the system for rape kit investigation.

“The stories of women who raise their voices across the country is so inspirational,” Neave Criado said. “It gives us the drive the knock down those barriers in law.”

As the first person in her working-class family to go to college, Neave Criado said she was determined to improve her community even before her political career began.

Neave Criado acts as a voice for women in Texas, continuing to draft more bills meant to tackle sexual harassment and assault.

“We have a long way to go to make up for decades of the laws not written in [women’s] favor,” Neave Criado said.

Even when people scream or swear at Neave Criado, her negative experiences with a door-to-door campaign are nullified when a citizen chooses to share their story, leading her to her next political move.

At the end of her speech, Neave Criado recounted meeting a pair of young girls at an apartment complex in one of Dallas’ poorer neighborhoods. The girls recognized her immediately and told her they wanted to follow in her footsteps.

Neave Criado has a photo of those girls in her office and said they give her inspiration.

“It’s drives us to do the work we’re doing,” Neave Criado said.