The Et Cetera • May 3, 2022 • https://eastfieldnews.com/25133/news/robinson-takes-action-against-homelessness/ 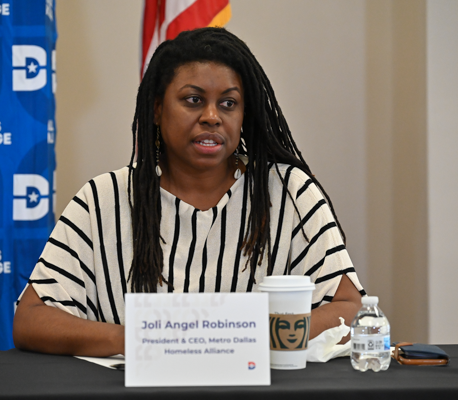 Joli Angel Robinson speaks about her work and the obstacles she has faced.

A work trip to India in her early 20s inspired Joli Angel Robinson to fight for better economic equality at home.

During the trip, she saw the social challenges the country was experiencing, including young children begging in the street. She set a goal that when she came back home, she was going to start finding ways to help others here in the United States.

Today, Robinson is the president and CEO of Metro Dallas Homeless Alliance, an organization that works to eliminate homelessness in Dallas and Collin Counties.

Robinson said she’s also trying to eliminate obstacles for her employees by ensuring everyone is paid equitably.

She said women have been conditioned to live in a male-dominated atmosphere. She compared that to a fish that has always lived in salt water and when given the opportunity to move to fresh water, the fish doesn’t survive because it is not used to the new water.

“Sometimes we’ve learned to operate and breathe and drink salt water for so long, that when given an opportunity to set policy for fresh water, we lose our mind,” Robinson said.

Robinson said one of the failures she sees in her life was spending too much time on a path that others had set for her.

“I think I spent too many years, I do not want to call them wasted years, but just too many years trying to align to the vision that other people had for me,” she said.

Robinson said her biggest accomplishments are in the work she does today — helping the homeless of the community.

Robinson’s father has experienced homelessness for the past 12 and a half years in Atlanta, and she sees the work that she is doing as a legacy.

“I wish and hope that there are people up there in Atlanta that are working just as hard and passionately for him and those that are experiencing homelessness alongside him, just as I am here,” Robinson said.

She said this thought motivates her to do more to ensure the system works.

In the end, Robinson encouraged women who want to follow in her footsteps.