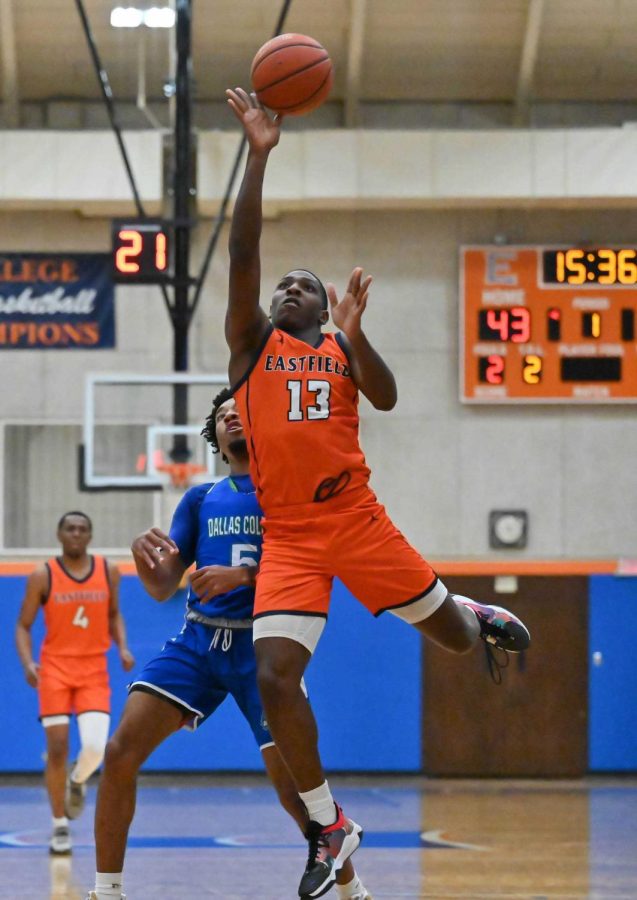 Spencer Simes, the Harvesters’ freshman guard, was recently selected to the NJCAA Division III All-America team and will represent Dallas College in the NJCAA Men’s Basketball Coaches All-Star Game on May 14 in Las Vegas.

“I found out a couple weeks ago that I was selected along with another great number of great athletes to be a part of this game,” Simes said. “I was really in shock.”

Simes led the Harvesters to a fourth-place finish in the NJCAA national tournament in March, finishing second in the nation in scoring, averaging 24 points per game, hitting 53% of his field goal attempts and averaging 7.8 rebounds in 35 games.

Coming from Northern Little Rock High School, one of the top basketball programs in Arkansas, Simes averaged 15 points a game, but was never recruited highly.

“I decided to take the JUCO route, and after my first year, I felt rejuvenated.” Simes said. “God had it planned for me to be here. And with the inspiration of my family, as well as my hard work and determination, I kept going in an all-or-nothing battle, and it led me here.”

Coach Anthony Fletcher is working with Simes to be sure that he is in shape, staying sharp and focused as he looks to impress potential scouts and recruiters.

“We are working on shooting, recovering, getting that competitive edge back after a long season,” Simes said. “I really want to impress more schools and coaches while in Vegas, and hopefully have more options available to further my career.”

Currently, Simes is sitting on multiple offers from four-year universities, and even some from NCAA schools that are currently undisclosed, as he looks to make a statement in Nevada.

“Numbers talk,” Simes said. “They talk and they’ll be looked at by everyone there. I hope to go to four year university, but I’m confident there could be even more [opportunities] for me after this, so we will see.”

Simes will be joined by North Lake guard Gregory Crawford in the all-star game.