The Et Cetera • May 3, 2022 • https://eastfieldnews.com/25104/sports/nil-deals-should-be-regulated-to-preserve-college-sports/

OPINION: NIL deals should be regulated to preserve college sports 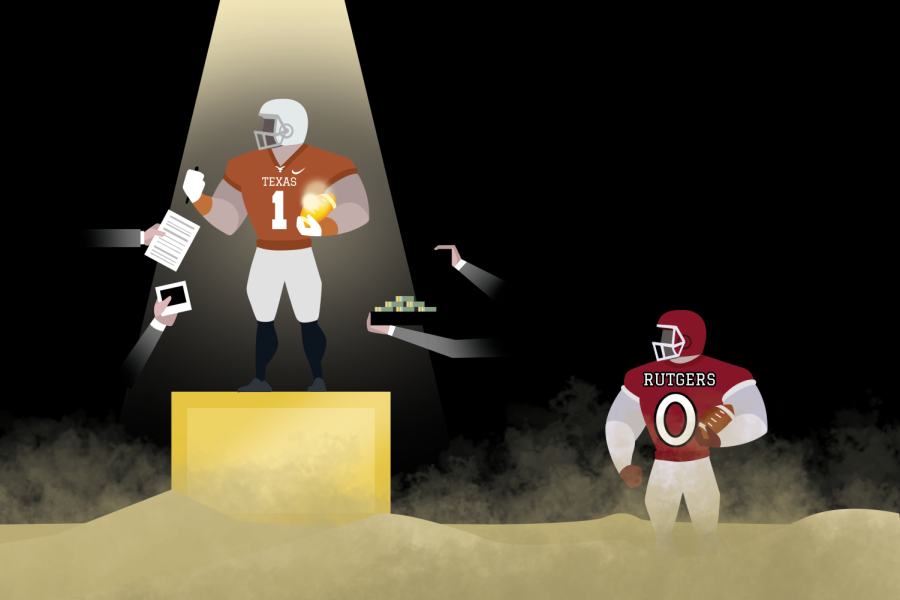 NIL deals have the potential to ruin the competitive nature of college sports and people may not even realize it.

On July 1, 2021 the NCAA approved a policy called NIL, which allows college athletes to profit off of their name, image or likeness and accept endorsement deals.

While the NIL policy creates financial opportunities for players, there are many components of the system that create legitimate concerns and issues. Things like differences in school athletic funding and athlete popularity have already forced the NIL world to get out of hand.

The Texas Longhorns’ 2021 quarterback, Casey Thompson, understood his limited NIL potential after Quinn Ewers, an Ohio State five-star quarterback, transferred to Texas after entering the portal. According to Heartland College Sports, “Thompson is looking like QB1 for the Cornhuskers and it sounds like there are more perks to being ‘the guy’ in Lincoln rather than Austin”.

Although the NIL policies and transfer portal gives athletes the chance to find better opportunities, this system unfairly benefits schools with more funding.

In 2020, the Ohio Stte Buckeyes football program brought in $115.1 million in revenue. Rutgers University, on the other hand, only generated $26.9 million.

Therefore, schools like Ohio State, the University of Georgia and the University of Texas that have well over $100 million in football funding a year can offer NIL deals that pay out increasingly more than a school like Rutgers that only has a fraction of that budget.

This gap in funding will make the bigger programs powerhouses. These schools will use their wealth and influence to attract higher-rated recruits and ensure that the smaller schools will never have the talent to compete.

The University of Texas recently created an NIL deal called the Pancake Factory that guarantees every scholarship offensive lineman $50,000 the minute they arrive on campus in exchange for participating in university supported charity events.

After this NIL deal was put into place, UT signed its best offensive line class in years. While I am a diehard UT fan and am very excited about the strength of our O-Line, the system is obviously unfair to underfunded schools and athletic programs.

Another issue is player jealousy. Highly touted players will inevitably make more money than others, which could cause unwanted tensions between teammates and lead to toxic playing environments.

It’s no secret that Ewers will make substantially more than almost any other Longhorns team member.

The ultimate effect of NIL deals is that there could be about six core schools that since it isn’t a person could dominate college football because of their resources. This would ruin the competitive nature of college football and the same teams would win every year.

Even Alabama’s Nick Saban, with more national football championships than any other college coach, says that NIL “creates a situation where you can basically buy players,” according to an article from cbssports.com.

I’m not saying I completely disagree with NIL because there are some great aspects of it. The program gives talented athletes the ability to support their families and profit off their name, which is positive, but I strongly believe that unless the NCAA introduces additional regulations, it could ruin competitive college football.

In my opinion, putting a salary cap on NIL deals could be a way to ease the potential problems and help the smaller schools be competitive in recruiting.

Ultimately, the effects of the NIL system are still yet to be seen. While I do believe these rules can be beneficial, I hope the NCAA looks into the many issues these policies can create in order to preserve the true spirit of college sports.

While I do not believe NILs should be fully removed, I strongly believe they can ruin the competitive nature of college football and true school spirit.

College football is great because players care about making their schools proud and winning — not the size of their paychecks.

It would be a shame for so many great and competitive programs to be driven to irrelevancy because of the NIL policy.