Advocating for victims of human trafficking 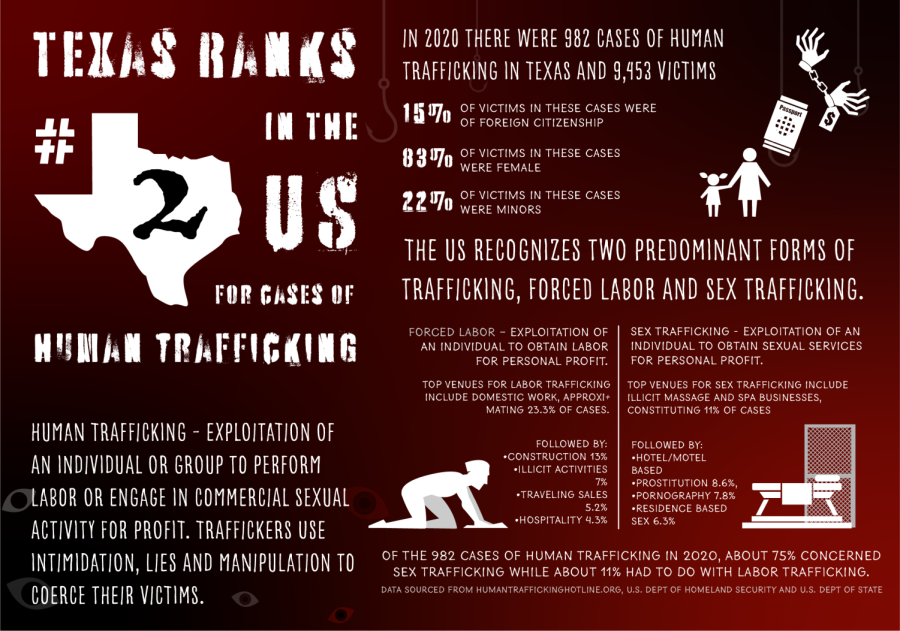 A 17-year-old girl checks into the emergency room, pregnant with her third child. She avoids eye contact with staff, and the person she’s with has control over her personal belongings.

Improperly healed broken bones and other injuries are evident, but no one stops her from leaving the hospital after giving birth with the father of her children, 13 years her senior.

These are signs of human trafficking that can easily go unnoticed when people don’t know what to look for, according to panelists at Cedar Valley’s “Stop Human Trafficking” event on April 12.

With over 10,000 cases of human trafficking reported in the United States in 2021, 987 came from Texas, according to theNational Human Trafficking Hotline.

“We are at a crisis of mass proportions,” said Joe Seabrooks, president of Cedar Valley. “However, we are not going to be able to tackle a crisis as huge as stopping human trafficking without forming the relationships needed to be able to impact the people who are suffering.”

Human trafficking is not a new crime, but the strategies to combat it are constantly changing.

Dallas Sheriff Marian Brown, one of the panelists at the event, said human trafficking is nothing more than modern day slavery.

“We also had to realize that human trafficking was a lucrative criminal enterprise,” Brown said. “And that to really effect change, we had to affect the profitability.”

The Trafficking Victims Protection Act of 2000 is the first comprehensive federal law to address human trafficking. Using a three-pronged approach, the law aims to prevent the offense, protect the victims and provide them with resources, and prosecute the perpetrators.

“Many people are under the myth or the assumption that [the victim] has to be someone that is undocumented or from another country,” Morgan said. “That is not so because over 80% of the individuals that are trafficked are United States citizens.”

Tonya Stafford, founder of the nonprofit organization It’s Going To Be Okay, and a former trafficking victim herself, uses her personal experience to navigate the nuances of this crime.

“When I was taken, nobody looked for me, nobody was doing the right thing for me,” Stafford said. “And during those 10 years I was raped, beaten and almost killed, but I survived.”

Now with a trauma-informed staff and counseling centers at her disposal, she tries to help victims who are suffering through the same abuse and neglect she did.

But not all victims are eager to be saved by people like Stafford. With the promise of housing and food and consistent threats from their abuser, accepting help from the outside can be frightening without the guarantee of substantial support.

Morgan, working in conjunction with the surrounding community, set up large rescue missions for these individuals.

“The whole goal was to get them away from the traffickers [and] to offer them assistance and support comprehensively,” Morgan said. “We had clothing, and we had housing set up for them.”

In spite of these efforts, Morgan said only three of the 46 individuals who were recovered were immediately receptive to these services.

Many victims have accrued a long criminal record because of the situations they have been forced into. Prostitution, drug use and distribution, and theft are crimes many victims are found guilty of while being trafficked.

Bianca Davis, CEO of the nonprofit agency New Friends New Life, said corporate, legal and community partnerships are important to rectify these situations for the women she assists.

“She is guilty on some levels by appearance,” Davis said of the typical victim she encounters. “She will not admit what he has done to her, so she’s backed into a wall. She’s pressured to accept responsibility because she’s looking at a death sentence from him if she gives law enforcement information.”

However, thanks to a partnership with the district attorney’s office, Davis can offer these victims a pre-trial agreement. For example, a woman who was forced into sex work by her abuser and picked up on a misdemeanor prostitution charge now has the option to enroll in the New Friends New Life phase program and have her record put up for expulsion.

“This provides a long-term clearing path for her,” Davis said. “Now she can get a job without having to check the box that says ‘con.’ Now she can apply for housing.”

Matt Osborne, leader of the New Friends New Life advocacy group, said he works to prevent human trafficking at the source. He coordinates a group of 100 men in North Texas as they take action against sexual trafficking and the exploitation of women and girls through advocacy, education and volunteerism.

Osborn said the journey to becoming a buyer and trafficker involves many steps. A man doesn’t just wake up one day and say he is going to buy another human being.

Brown encouraged the audience to support victims of human trafficking in any capacity they are able.

“With continued training, with continued awareness and relevant laws, we here in Dallas County and throughout the state and throughout this country can indeed combat this crime,” Brown said. “And again, we encourage everyone if you see something, say something. Let’s keep up the fight. We can win this battle.”