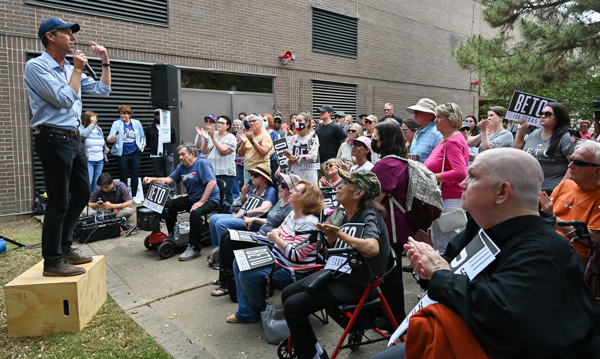 Beto O'Rourke responds to questions from the crowd about his plans to improve public education and expand health care access. Photo by Rory Moore/The Et Cetera

Texas gubernatorial candidate Beto O’Rourke spoke to a group of Dallas employees and community members at North Lake April 21.
O’Rourke, sporting a dark blue Dallas College baseball cap, shared his vision for improving jobs, public education and expanding Medicaid
access across the state. His visit to North Lake was one of several rallies intended to boost support for his campaign.

“If you’re working two jobs to make ends meet, if you have to take on that third shift to put food on the table, pay for medication, keep a roof
over your head, that is pretty hard to do,” O’Rourke said. “And too many people right now are struggling in the state of Texas.”

O’Rourke and Republican incumbent Gov. Greg Abbott will face off at the general election Nov. 8. Abbott is seeking a third term in office.

O’Rourke accused Abbott of focusing on controversial policies like limiting abortion access for women and voting restrictions instead of things that are important to all Texans like jobs, education and healthcare.

“When we win this thing, we’re going to get our priorities right,” O’Rourke said.

O’Rourke said his number one priority as governor would be jobs, and he praised Dallas College’s early college high school program, saying that it gives students a head start on their careers.

“So how about we take the lead that you all have provided here at Dallas College . . . [and] extend it across Texas,” O’Rourke said. “So that every graduating young person has the skills and education they need to work the kind of jobs that give them purpose over the course of their lives.”

If O’Rourke does win in November, he will be the first Democratic governor in the state of Texas since 1995. Another one of O’Rourke’s priorities is improving public education, and he said that starts with increasing support for teachers. He proposed raising teacher’s salary by a minimum of $7,500 per year.

“What if we paid every single educator in the state of Texas enough so that they didn’t work a second job and can fully focus on the job they have before them right now?” O’Rourke said.

Amy Carrillo, an Irving resident, came to find out more about O’Rourke’s plans to help Texans.

“Mainly I’m interested in funding more for education, so that’s one of the main reasons,” she said.

Bedford resident Jan Morgan said O’Rourke is the best candidate for the state. She doesn’t agree with Abbott’s immigration policies, referring to Abbott’s recent move to bus migrants to Washington D.C. to make the Biden administration take responsibility for them.

“I’m very concerned,” Morgan said. “I think [O’Rourke’s] heart is in the right place. I think his perspective is what we need. I’m not seeing it with the current administration, so I’m hoping and praying that yes, there will be a change.”

Kimberly Cruz, a Tarrant County College student, also came out to support O’Rourke. This will be the first election she will participate in, and plans to cast her vote for him.

“I feel like this is a change that we need,” Cruz said. “I know Beto would certainly help us move towards that path.”

Some of Cruz’s family are immigrants, and she said that is the issue that is closest to her heart.

“I’m going to support [O’Rourke] because I know that he’s going to spread love, not hate,” Cruz said.