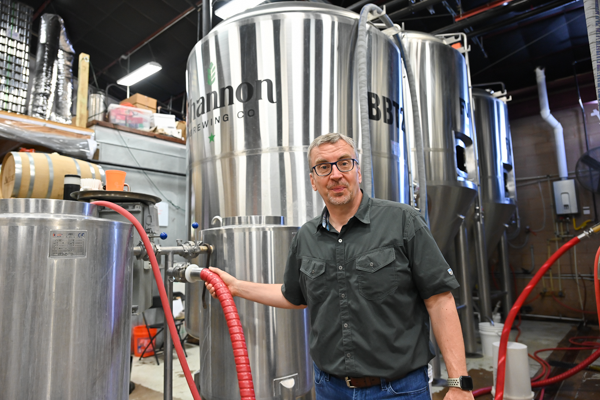 Peter Boettcher teaches about the mechanisms in the process of brewing at Shannon Brewery on April 18. Photo by Rory Moore/The Et Cetera

Peter Boettcher is nearing his 40th year in the brewing industry. He’s worked in leadership positions for brewing companies such as Miller, Coors, Pacific Western and Abita.

Boettcher is always looking to help in developing prospects in the brewing industry, unable to settle in his occupation. He shares his expertise with students as the founder and master brewer for Eastfield’s brewing program.

“I’m very happy we’re back with Dallas College,” Boettcher said. “I think this program belongs in a community college.”

Eastfield’s brewing program was closed due to the pandemic. The program relaunched in March after students and local breweries praised the program for being a gateway into the brewing industry.

“Breweries ask us all the time for staff,” Boettcher said. “Not one month goes by where we don’t have two or three inquires about having someone to hire.”

Over 20 breweries across Texas are partnered with the program to give students a space to gain hands-on brewing skills.

The program boasts a 98% placement rate. Nearly every student finds a career shortly after completing the program, and some begin careers before graduation.

Some students have opened their own successful breweries throughout Texas, such as the Klaus Brewing Company in Houston.

Boettcher said the list of partnered breweries is growing. Breweries across America have opened their doors to accommodate Eastfield students.

“The interaction between the school and industry is important,” Boettcher said.

Steve DeShazo, senior director of Workforce and Career-Connected Learning at Dallas College, partnered with Boettcher to help relaunch the program.

“Every person I know who worked with this growing program has positive things to say about it,” DeShazo said.

Thanks to the program’s industry connections, DeShazo encountered no trouble reconnecting with partnered breweries.

“Every single time I brought [the program] up, they said Peter is your guy to run it,” DeShazo said. “[Partners] said we should continue to run our [program.]”

No brewing programs currently exists at the community college level in Texas, resulting in a competitive environment for enrollment positions.

Daniel Medrano was among numerous in-state Eastfield students who inquired about the program’s shutdown. Eventually, DeShazo contacted him and ensured enrollment when the program relaunched.

“Now that [my son] is graduating, I’m going back to doing what I love,” Medrano said. “And I figured, why not brew beer?”

Shannon Brewing Company in Keller, Texas, one of the program’s first partners, hired Medrano for an internship.

Medrano discovered his love for brewing when he tried brewing at home.

After the death of a close friend, Medrano and his friends collaborated to brew homemade beer as a tribute.

After that, Medrano began homebrewing as a hobby. The brewing program gave him an outlet to explore his passion.

Program students like Medrano hope to open their own brewery someday.

“Somebody is going to enjoy something I helped create,” Medrano said.

Like Medrano, Boettcher unintentionally discovering his love for brewing after being invited to work at his uncle’s brewery in Germany. After that, Boettcher moved to the United States after receiving a work opportunity in Pittsburgh.

Boettcher’s stake in brewing remained constant for decades. He intends to spark similar work ethic in students through his hands-on teaching approach.

“It’s all about the people,” Boettcher said. “The students have passion.”

Boettcher continues to use his industry expertise to help build up Eastfield’s brewing program for upcoming and passionate brewers.

“[The students] have a lot of ingenuity and can-do attitude,” Boettcher said. “It never stops to amaze me.”

Editor’s Note: A previous version of this story incorrectly stated Steve DeShazo’s title and Peter Boettcher’s role with Shannon Brewery and Legal Draft Brewery. DeShazo is the senior director of Workforce and Career-Connected Learning at Dallas College. Boettcher is not a partner at Shannon Brewing Company and has never worked at Legal Draft Brewery.