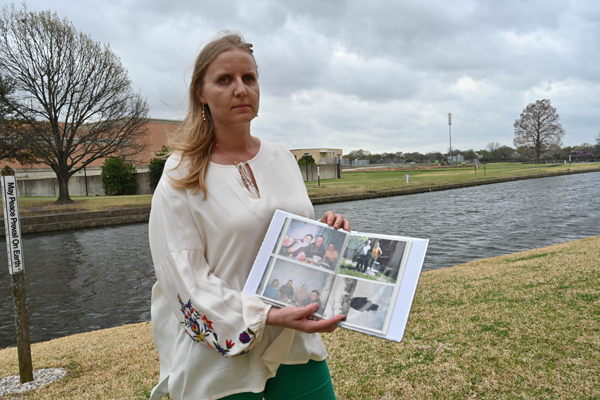 Fourth grade teacher Svetlana Almazan’s day was interrupted by a commotion of gunfire and explosions.

Living in Sumy, a Ukrainian city close to the Russian border, Svetlana was one of the first people to witness invading forces march into her neighborhood on Feb. 24.

Russian tanks and soldiers swarmed the streets of her town. Ukrainian defense forces arrived just as quickly, setting the stage for the Battle of Sumy.

Nonstop fighting dragged on until Russian forces moved to other targets across Ukraine.

Two weeks into the invasion, Svetlana was finally able leave Sumy to visit her father in Russian-occupied Putyvl, a Ukrainian village located 30
miles from the Russian border.

“Everything has changed,” Svetlana said in an email interview. “Nothing is normal anymore.”

Russian tanks and checkpoints are set up throughout the Sumy Oblast region, making trips outside one’s home a gamble for one’s life. However, donations from Svetlana’s sister, Viktoriya Almazan who is a student success coach at Dallas College’s Richland campus, means one less trip into a war zone.

“I didn’t expect Russians engaging in so many war crimes,” Svetlana said. “They continue to attack civilian targets.”

After apartment bombings started in her area, Svetlana moved into her father’s home. She said she believes her fourth-floor apartment is a prime
target for Russian artillery.

Not only does Svetlana worry about indiscriminate airstrikes and gunfire, but also her elderly father, Viktor, who has heart issues. Svetlana eventually transferred her father to a hospital, but doctors can’t help without access to medicine.

“My friends and family are suffering,” Svetlana said.

Viktoriya said she found out about the invasion from the news. She immediately reached out to her sister.

“The first thing coming to mind is that it’s going to be bloody,” Viktoriya said.

Viktoriya calls her family in Ukraine three times a day and texts them frequently. She said she feels instant relief when her sister replies
to her texts.

“They still have electricity and gas, but nobody says it’s going to stay that way,” Viktoriya said. “Everything changes by the second.”

Viktoriya pushed for Svetlana and her father to evacuate as soon as humanitarian corridors were established but backtracked after hearing about civilian casualties on protected routes.

Like many Ukrainians, Svetlana is holding out for a better evacuation opportunity.

“There are many stories, but all of them are sad,” Svetlana said. “War has a lot of grief and distractions.”

North Lake student Hanna Lutchenkova, a refugee from the 2014 Russo-Ukrainian War, relates to Svetlana’s experience. She lived in the Donbas region, one of the first areas assaulted by Russian forces.

“It was 4 p.m., and I was taking my son out of day care,” Lutchenkova said. “Everything went as usual until we got to Main Street. I saw big Russian tanks.”

For four months, Lutchenkova and her seven-year-old son hid in their apartment. She couldn’t go to a bomb shelter because of the indiscriminate killing carried out by Russian forces.

Lutchenkova lost a friend in a Russian airstrike: the woman and her four-year-old daughter were both killed. This incident compelled Lutchenkova to shelter in place, fearing a similar circumstance for her and her son.

“This was hell on earth,” Lutchenkova said. “My journey was long and horrible . . . every minute was risky, a chance to lose your life.”

Lutchenkova eventually scraped together enough money to smuggle herself and her son out the country.

Much to Lutchenkova’s satisfaction, Russia failed to capture Ukraine in 2014. Seven years later, citizens like Svetlana hope for another Ukrainian victory, but fear military escalation in this case.

At the end of March, Svetlana’s bus to Putyvl frequently passed groups of angry, starving Russian soldiers retreating to the border. She dreaded the possibility of Russian soldiers assaulting the bus.

“The war has affected everyone in Ukraine, from one way or another,” Svetlana said.

Svetlana and her fellow citizens try to maintain faith in Ukraine’s military.

“I think, from a military stand point, the Ukrainian army has done a great job from an army that outnumbers them 10 to 1,” Svetlana said.

Svetlana and Viktoriya celebrate successful pushbacks by the Ukrainian military.

In early March, Svetlana told her sister about Ukrainian forces marching 15 captured Russian soldiers through the streets of Sumy. She described the locals erupting into joy, herself included.

But with no end to the war in sight, small victories pale in comparison to Svetlana’s unyielding wish for a Russian pullout.

“Nothing good can offset the horrific things this war has bought,” Svetlana said.