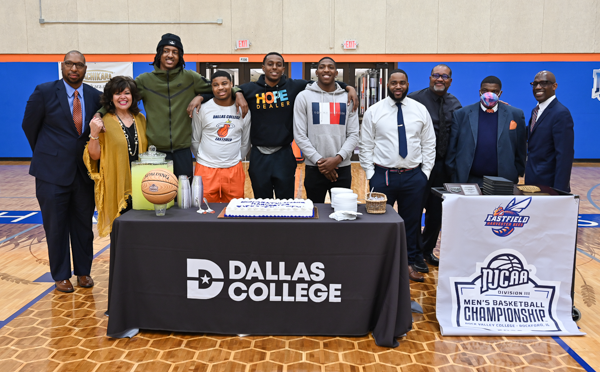 Players, coaches and Eastfield administration gather in the gymnasium to celebrate the Harvesters' fourth place finish in the national tournament on March 31. Photo by Rory Moore/The Et Cetera

The Eastfield Harvesters’ dream of a national title came to an end when they lost 77-76 to the No. 2-seeded Genesee Cougars in the semifinals of the NCJAA Division III national tournament in Rockford, Illinois on March 11.

The game came down to the final second, but the Harvesters missed two free throws with .03 seconds left and went on to finish fourth in the tournament. Eastfield ended the season with a 23-7 record and a district tournament championship.

“We gave it everything we got. I wouldn’t say we fell short,” guard Geontay Davis said after the national tournament. “Things happen, but it’s a daily achievement to be better than the day before. This season helped me personally grow, and I hope this helps me get to that next level.”

The Harvesters opened their national tournament journey March 9 with an 81-67 win against the Community College of Philadelphia, never letting them get close. The Harvesters flexed their defense and forced 29 turnovers.

That defensive pressure would was a crucial element to the Harvesters’ style of play throughout the tournament as they forced 32 turnovers against the Rhode Island Knights the next day, easing past them with a 93-74 win.

“We were everywhere, and we never wanted to let them breathe,” guard Spencer Simes said. “We played fast, Eastfield basketball, hands in the lane, putting pressure consistently. That’s huge. We played them right into our hands, and that’s important in any game.”

In the semifinals against Genesee, the Harvesters struggled to find their rhythm early – dropping passes and losing possessions – but they took the lead by two at halftime after their defense rallied to force turnovers that led to points.

The Harvesters were able to cut the deficit to three in the final three minutes. The teams went back and forth until, with 12 seconds on the clock and Genesee leading by one, Simes led the Harvesters in one more attack. After a few passes and an attempted shot by Williams, he was fouled with .03 seconds left. He was unable to hit either free throw, however, as the Cougars advanced to the championship game.

“This didn’t come down to the last shot,” Simes said. “There were hundreds of plays before that, but that’s what just everyone sees in the moment. Missed free throws, wasted moments. Sometimes you win some, sometimes you lose. Today just wasn’t meant to be.”

Simes led the scoring with 21 points while Williams added 14. Mike King came off the bench to score 15 points, but it was not enough as the Cougars outplayed the Harvesters in the paint, shooting 49% from the field along with 45% from 3-point range.

“I think this is one of the better Eastfield teams in history, and tonight showed that,” Eastfield coach Anthony Fletcher said. “This loss won’t tarnish everything these guys have done. Sometimes that’s part of the game. We averaged (forcing) about 30 turnovers a game at this tournament, and that’s not something you see very often. This is just what happens at a semi-final game.”

Tired legs and bodies stepped into the arena for the third-place game the next day as the Harvesters lost 80-66 to tournament host Rock Valley College.

“It was a battle,” Eastfield coach Anthony Fletcher said. “Even though we were playing a national tournament, we were playing an away game. We hung on for a good while, but they played well and shot well. I think with everything that happened in the semifinals, it took some breath out of us, but it’s important we competed and didn’t lay down.”

The Eastfield Harvesters took a six-point lead early, but it wasn’t long before Rock Valley dictated the game and cruised on to a 16-point victory.

Even though the Harvesters did not win the national title, they were rewarded for their efforts with the 2022 NJCAA National Tournament Sportsmanship award.

“Being in the national tournament five times in the past 10 years gives us more opponents to learn from, where we are able to even use it in a recruiting sense,” Fletcher said. “We’ve learned what these other schools like to do in a tournament and take it into consideration.”

Simes, the second-leading scorer in the nation for the NJCAA Division III ranks, was selected to the all-tournament team for his standout performance, putting up 77 points, 21 rebounds, 16 assists and eight steals and blocks during the tournament. Anthony Hunter scored 60 points, and Williams added 53.

“It was very much a learning experience,” Fletcher said. “So now the goal is to be back next year with the same goal to win it all.”