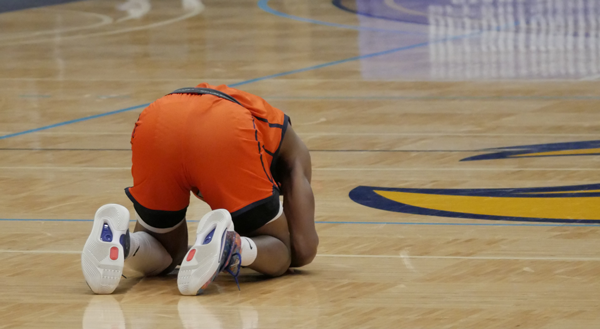 ROCKFORD, Ill. — The Eastfield Harvesters suffered a heartbreaking 77-76 loss to the No. 2-seeded Genesee Cougars in the NJCAA Division III semifinals Friday night, ending their chance to win a national title.

Just like the district championship, the game came down to the final second. This time, Eastfield’s Jacore Williams missed two free throws with .03 seconds left on the clock.

“This didn’t come down to the last shot,” Harvesters guard Spencer Simes said. “There were hundreds of plays before that, but that’s what just everyone sees in the moment. Missed free throws, wasted moment. Sometimes you win some, sometimes you lose. Today just wasn’t meant to be.”

The Harvesters were able to keep the game within reach. However, missed opportunities at the line and wasted possessions doomed them in the final seconds of the game.

The game ended with the Eastfield shooting 42% from the field and being outrebounded 46-29, but only turning the ball over 10 times versus Genesee’s 22.

“We put everything on the floor and played hard,” Williams said. “It came down to the little things. We missed shots, free throws, making right decisions. We didn’t do that tonight.”

Simes led the scoring with 21 points while Williams added 14. Mike King came off the bench to score 15 points, but it would not be enough as the Cougars outplayed the Harvesters in the paint, shooting 49% from the field along with 45% from three-point range.

“I think this is one of the better Eastfield teams in history, and tonight showed that,” Eastfield coach Anthony Fletcher said. “This loss won’t tarnish everything these guys have done. Sometimes that’s part of the game. We averaged (forcing) about 30 turnovers a game at this tournament, and that’s not something you see very often. This is just what happens at a semi-final game.”

The Harvesters struggled to find their rhythm early — dropping passes and losing possessions  — but they took the lead by two at halftime after their defense rallied to force turnovers that led to points.

In the final three minutes, the Harvesters were able to cut the deficit to three. The teams went back and forth until it came down to the final shot. With 12 seconds on the clock and Genesee leading by one, Simes led the Harvesters in one more attack.

After a few passes and an attempted shot by Williams, he was fouled with .03 seconds left. He was unable to hit either free throw, however, and sent the Cougars to the finals of the national tournament.

“This team challenged us because they were able to slow the tempo and slow us down, but still able to run their sets,” Simes said. “We still pushed them and battled them. At the end of the day, we’ve just got to see things in a positive way and try not to let the negatives weigh us down.”

The Harvesters will play for third place Saturday at 2 p.m. against tournament host and No. 8 seeded Rock Valley College. Fletcher said the game is all about leaving the tournament with a positive experience.

“We’ve still got more basketball left,” Fletcher said. “We are one of the nation’s leaders in history for most wins in this tournament so we want to keep that title and keep adding to it; play for pride and play for the college.”