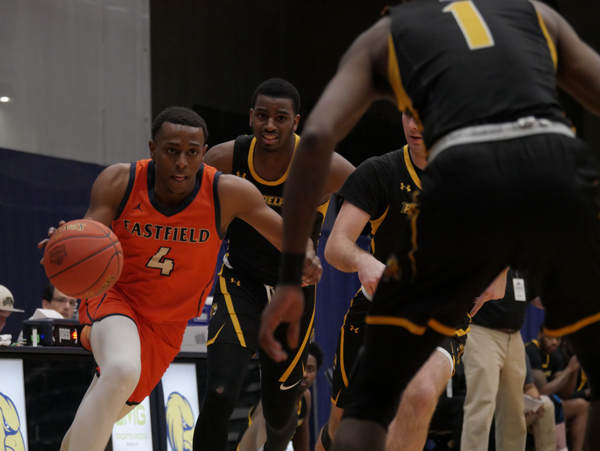 Jacore Williams drives past a defender in the Harvesters' first game of the national tournament on March 9. The Harvesters scored an 82-67 win against the Community College of Philadelphia. Photo by Manny Willis/The Et Cetera

ROCKFORD, Ill. — The No. 6 seeded Eastfield Harvesters advanced to the quarterfinals of the NJCAA National Tournament today after a dominating 82-67 win against the 11th seeded Philadelphia Lions.

In the opening minutes, Philadelphia showed its physical side, keeping the game tight as the teams battled back and forth. The Harvesters soon found their rhythm, though, and their high-powered offense began to pick up points and get some important rebounds.

“Philly is a great team,” Simes said. “Coach really put emphasis on me and Jacore getting the rebounds because they are a team who loves to take it to the hole. We had to make sure we did our part, and I also hold myself accountable to play my part and to put up points.”

The momentum really kicked in after the Harvesters began forcing turnovers — 29 total, including 18 steals. Anthony Hunter had a team-high three steals.

“We were everywhere today,” Simes said. “We didn’t give them any breathing space. That’s huge to turn a team over that many times. They played right into our hands.”

By halftime, the Harvesters held a comfortable 36-26 lead. In the second half, they extended their lead to as much as 20 points. Tired legs and back-and-forth play let the Lions slightly close the gap, but not enough to dent the Harvesters’ confidence.

King proved to be a valuable asset, coming off the bench to contribute four rebounds, two blocks and a steal in addition to his scoring.

“I’m able to hold it down while people are out,” King said. “I do put up good minutes, and I just want to be valuable with those minutes when I do play. I like being able to contribute to this team’s wins, not just play defense.”

The Harvesters look to maintain their defensive work while keeping their high-powered offense rolling Thursday at 8 p.m. when they face the No. 3 seeded Rhode Island Knights.

Coach Anthony Fletcher is no stranger to this stage of the national tournament and looks to pick up where past teams couldn’t. With a record number of appearances at this tournament and only one title, the Harvesters are hoping to make history with this team.

“[In] 2013 we played for a national championship,” Fletcher said. “Our biggest thing is getting back to the final and win it all. We’ll be up against different styles of play, different coaches and setups, but it all comes down who wants it more.”