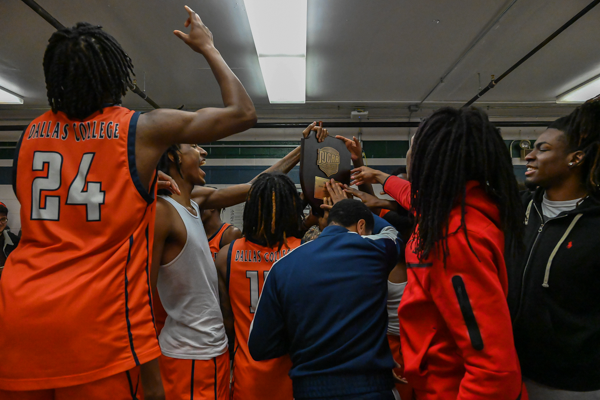 The Harvesters celebrate their win over North Lake on Feb. 26. Photo by Rory Moore/The Et Cetera

The win came from a late floater from captain Geontay Davis with 0.3 seconds left.

“I’ve never taken the game-winning shot before. Normally I’d defer, but my teammates told me not to,” Davis said. “We kept being aggressive. It’s all surreal.”

The Harvesters last played in the national tournament in 2020 when they lost to Mohawk Valley 93-87 in their second game. They will try to win their second national title, with their first coming in 1997. They finished as runners-up in 2013, 2004 and 1992.

“I’ve been telling them since day one that we have enough to win a national championship, to go to the national tournament. You just have go out there and do it,” coach Anthony Fletcher said. “There’s been some ups and downs, but you gotta have faith in yourself. You have to go out and compete and play hard.”

Eastfield (23-6) entered the post-season ranked ninth in the nation and pushed the Richland Thunder-ducks to the side in the district semi-finals with ease. The Harvesters are now on a five-game winning streak heading into nationals. Their last loss came against No. 3 North Lake, 85-75, on Feb. 12.

“I’m speechless right now,” sophomore guard Anthony Hunter said. “We fought hard, came back and won. We did what we needed to do. Now we go to Chicago to do the same thing.”

In the final, Eastfield did exactly what they planned on doing, keeping the pressure early on in the contest to make it frustrating for the Blazers. Hunter led the scoring in the first half with 10 points, putting the Harvesters ahead by five at halftime, 33-28. Guard Jacore Williams left the game in the first half after picking up a knee injury but eventually returned in the second.

What seemed like an easy first half quickly turned into chaos as the Harvesters lost their grip on the game, falling behind by as many as 13 points with only seven minutes to play. The Eastfield Harvesters never caved in, though, and remained calm. They rallied late to briefly regain the lead only to lose it again.

With 13 seconds on the clock and Eastfield’s season on the line, they had one final possession. Davis was able to dribble past the Blazers defense and shoot a floater that went in to put the Harvesters ahead with just 0.3 seconds left. But a technical was called on the Eastfield bench when they rushed the court to celebrate, giving the Blazers a chance to send the game into overtime.

However, North Lake missed the free throw. The Blazers were able to make a full-court pass and hit their final shot, but it was after the whistle as the Harvesters upset North Lake in dramatic fashion.

The national tournament is set to be played March 9-12 at Rock Valley College. At large-bids, seeding and schedules had not been announced at press time. Until then, the Harvesters will continue to prepare for the journey ahead.

“We just have to play to our system” Fletcher said. “I’m so proud of these guys.”

The Harvesters have averaged 100 points a game this season, with transfer guard Spencer Simes ranked second nationwide in total points. The high-powered offense isn’t short on weapons when it comes to their attacking play, making Eastfield a serious contender.