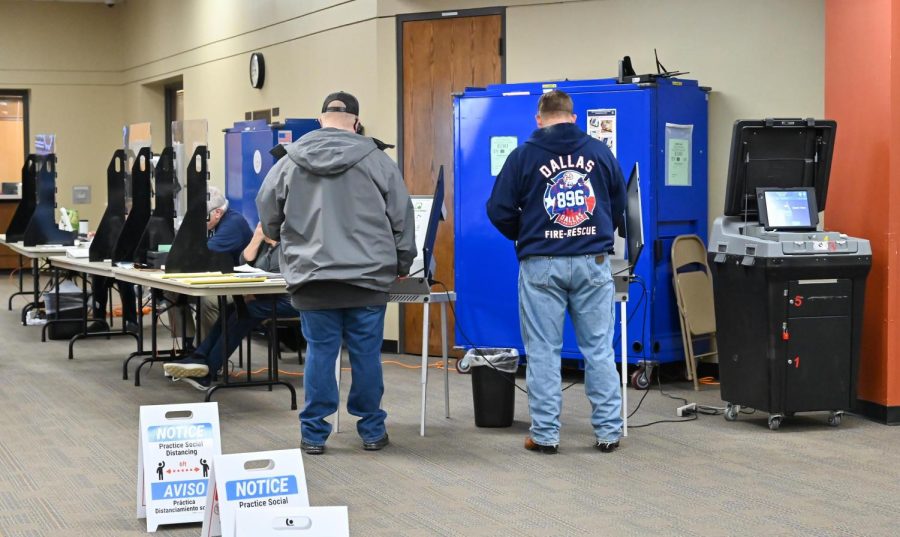 Senate Bill 1 prohibited drive-thru and 24-hour voting and added restrictions to mail-in voting applications. Data from the secretary of state showed a resulting increase for in-person voting under these new provisions.

Stoddard said numbers for Republican voters who participated in early voting were about 20% more than in 2018.

“[SB 1] greatly limited the number of mail-in ballots, which has been known for many years to be a problem with regard to being able to track the integrity of those votes,” Stoddard said.

According to preliminary data from the secretary of state, about 10% of voters cast ballots early.

Since the passage of SB 1, Melissa Alfaro, co-founder of the Hey Chica movement, worries the bill will decrease Latino voter participation.

Voters “aren’t paying as close attention to the elections as we hope they would,” Alfaro said.

Hey Chica advocates for diversity in Texas politics. They came to Eastfield on Tuesday to focus on registering Latina voters for higher Democratic numbers.

“Texan voters need to know how important a single vote is,” Alfaro said. “If [voting] wasn’t a real way to enact change, we wouldn’t see leaders working hard to change access to the ballot box. We’ve seen races where people lose or win by 50 votes.”

Texas Rep. Rhetta Bowers is a staunch opponent of SB 1 and participated in a walkout to prevent the bill from passing during the 2021 legislative session.

“There’s a lot at stake when you look at the mail-in ballot system not working because of the new laws,” Bowers said.

Under SB 1’s limitations, The New York Times found 30% of applications for mail-in ballots in the state of Texas were rejected.

Kendel Skudder, a Democratic watch party attendee, said a lot of those who had their ballot rejected were legally registered voters.

“It’s technicalities on the ballot, on the ballot envelope” Skudder said. “And it’s absolutely ridiculous and uncalled for.”

“Real voter suppression is happening,” Bowers said. “I know seniors are going to the polls when they’re used to voting by mail.”

Republican voters tend to vote in-person regardless of demographic.

“History and trends show Republicans are most likely to vote on Election Day,” Stoddard said.

Bowers and Alfaro continue their fight to increase democratic turnout despite restrictions.

“Not having many people turn out is concerning, but we’ll see what happens,” Alfaro said.

—Manny Willis contributed to this report.