Harvesters enter postseason No. 9 in the nation 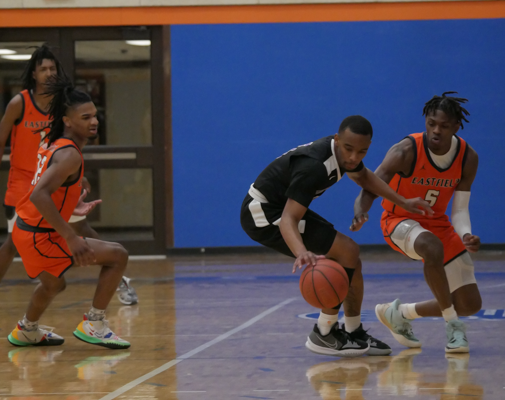 The Eastfield Harvesters secured the No. 2 seed in this week’s South-Central District Tournament with a 101-93 win over Mountain View on Saturday.

Eastfield (26-6, 8-2) heads into the postseason with a No. 9 national ranking and a first-round bye in the tournament. They will play Richland in the semifinals Friday at 7:30 p.m. after sweeping the Thunderducks in both of their meetings in the regular season. Richland defeated Cedar Valley 80-77 in the first round Tuesday.

Last season, the Eastfield Harvesters bowed out of the postseason after a heartbreaking loss to Richland (78-56) in the NJCAA Southwest District Championship, something coach Anthony Fletcher and the Harvesters look to avoid again. With 14 national tournament appearances, including one championship and three runner-up finishes, Eastfield is once again trying to earn a chance to play among the top 12 teams at nationals in Chicago.

A spot in the national tournament will require the Harvesters to win the district tournament for automatic qualification or claim an at-large bid awarded by the NJCAA. Eastfield has put together a strong resume, setting scoring records nationwide and catching the eyes of many, but there are no guarantees.

The Harvesters look to continue their dominant form as they are currently on a three-game winning streak and averaging 99 points per game. Anthony Hunter and Jamari Robertson have been in strong form lately as their offensive contributions have strengthened the Harvesters’ offensive attack. Eastfield’s star transfer Spencer Simes has been a dangerous offensive weapon as well, leading the nation in scoring.

An influx of new players and transfers has given Fletcher and his team a boost of leadership and experience playing at a higher level.

“I like transfers, guys who’ve already been in the fire,” Fletcher said. “Guys who have already played at scholarship school situations. Being a Division III junior college, if you can get some experienced guys that someone has put money into, then it helps your program. It’s awesome when you’re a nationally recognized program like we are.”

Fletcher said the Harvesters know how crucial each game is now, and they have no intention of overlooking anyone as they try to make a postseason run.

“Every year is the same battle,” he said. “The coaches in this conference are so good. The players are good. Everyone’s just trying to give their all.”