Winning on the court and in the classroom 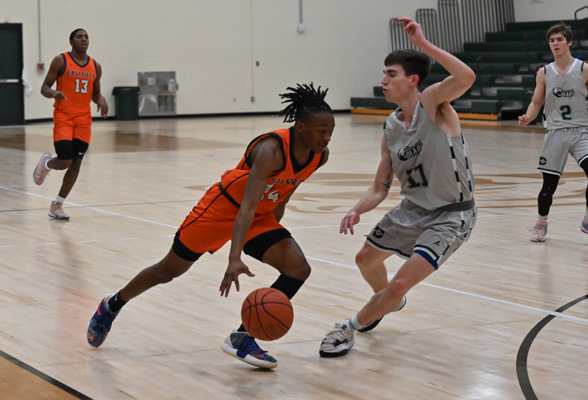 Jamari Robertson dribbles the ball while trying to evade a Brookhaven player on Feb. 9. Photo by Rory Moore/The Et Cetera

Jamari Robertson has known sports all of his life, and now this son of two coaches is a coach on the floor.

“That dude is a warrior,” Eastfield athletic director Anthony Fletcher said. “He goes up and he battles.”

Robertson’s mother, Shenika, and his father, Silas, are coaches of two different middle schools in Fort Worth. Thanks to his parents, Robertson has seen many situations and learned from everything he has seen.

As he has played the game, his senses have strengthened and has become more aware of what is happening on the court.

The Dallas Athletic Conference named Robertson the Region V Men’s Basketball Player of the Week for the week of Jan. 24.

Robertson attended Boswell High School where he achieved first team all-district. This caught the eye of Fletcher, who reached out to Robertson and told him he would be a great fit for Eastfield.

Fletcher said Robertson has a high mental capacity and is as smart on the court as he is in the classroom.

“Jamari is book smart, he has a high basketball IQ and also a [strong] work ethic,” Fletcher said.

Robertson earned Academic All American in his first year, an honor reserved for student athletes with an outstanding academic record.

“His IQ on the court is very parallel to his academic IQ,” Shenika Robertson said.

One obstacle that Robertson has had to face is being away from his home and his family. He stays in Mesquite with his aunt to attend Eastfield, but his parents live in Fort Worth. Robertson said it has been hard adjusting to not seeing has family during the week.

Robertson has one older sibling and two younger. His younger sister is a senior and his younger brother is a freshman. Both play basketball at Boswell High School.

“We’re all growing up and it’s crazy because sooner or later we’ll all be out the house,” Robertson said.

As for this basketball season, so far Robertson and the Harvesters have fought for a 21-6 record.  He has averaged 13.1 points per game and 26 minutes per game.

Robertson said he wants to be someone his teammates can look up to and go to when they need something.

Once the season is over, Robertson said he plans to transfer to a four-year school. Fletcher has already started helping him with the process by reaching out to schools and trying to get him where he wants to go.

For motivation, Robertson remembers the late Kobe Bryant as someone who inspired him. He uses the mindset of knowing there is someone else working at the same time as him, to push him to be better.

“The basketball may stop dribbling, but if the grades are still good then I’ll have a lot of places that I can go.”