OPINION: ‘Encanto’ is a gift to Latinx families 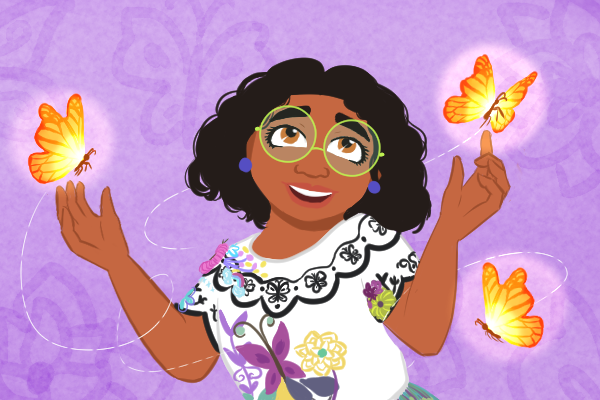 Watching Disney’s “Encanto” for the very first time gave me a sense of familiarity. Not only did the characters look like me, but their experiences mirrored mine — from being first-generation to growing up in a society that dictates who I need to be and what I need to accomplish.

The Madrigal’s story begins with their Abuela Alma and Abuelo Pedro who are forced to flee their hometown in Colombia. In an attempt to help Alma and his three children escape, Pedro sacrifices himself. A magical candle appears and creates the family’s new home.

As Alma’s children grow up, the candle gives each of them a gift that is then used to help their new community.

“Encanto’s” take on generational trauma is one many can relate to. I have often found myself wondering why the older generations in my family think the way they do. It wasn’t until I grew up that I had more clarity on this.

Many older generations in Latinx families have been through their own struggles and carry them to this day. In “Encanto,” Abuela does not talk about her trauma very often, but she finally comes to a breaking point when she realizes the pain she has caused her own family.

Mirabel, one of the youngest grandchildren, does not receive a gift and feels rejected by her grandmother because of it. In return, Mirabel tries to break the generational trauma by calling Abuela out on her behavior.

In today’s world where therapy and trauma are no longer taboo, many adults are trying to heal their inner child. Mirabel represents this.

Mirabel’s sisters, Luisa and Isabela, form part of the grandkids who received a gift. However, as the movie goes on, it is clear that these gifts are too much for them to handle.

Luisa has a hard time opening up and admitting this as she fears her family will see her in a different light. She is perceived as the strong one and continues this facade so she won’t be seen as less.

Luisa’s character represents what so many daughters growing up in Latinx families struggle with, even as adults. In her I see so many older sisters who must stay behind or grow up earlier than they should. Often they feel they cannot be vulnerable and express their real emotions, to the detriment of their mental health.

Isabela, on the other hand, is portrayed as the perfect daughter who follows the rules and wishes of her family. She is even willing to get engaged to a man she does not love, but whom her family sees as the perfect match.

Like Isabela, those of us who grew up in Latinx families thought we must fulfill our parents’ every wish to make them proud.

However, I have learned that you cannot always please your parents. There are decisions you must make on your own for the sake of your future and what makes you happy. As Isabela begins to realize this, she finds a way to reinvent herself in her own way and live for herself and not for the approval of others.

This animated film is not the conventional Disney movie. It deals with a lot of important issues that are ignored in our families. I encourage Latinos to watch what feels like a love letter to adults and children in traditional Latinx families.