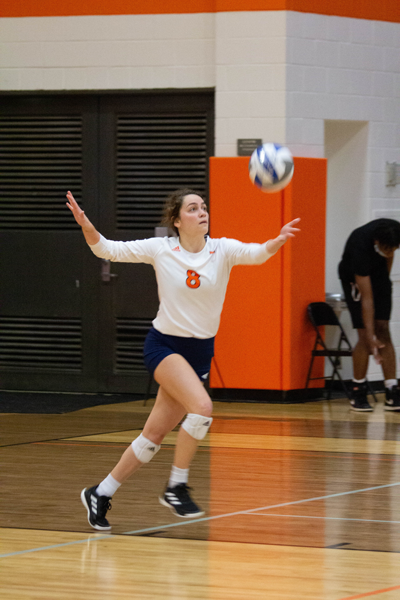 Allie Jones serves the ball against Cedar Valley on Sept. 30 where the Harvesters won 3-2. Photo by Rory Moore/The Et Cetera

Before her freshman season with the Harvesters, Allie Jones had spent her volleyball career as an offensive outside hitter. Then Eastfield coach Brandon Crisp told her it was time to focus on a defensive position and she started as a libero, where her biggest struggles weren’t just learning the new position, but also leading her team on the court.

“My biggest challenge was obviously learning the new position last year and being open to learning this new position,” Jones said. “But also, [it was difficult] because I’m very hard on myself. So, trying to overcome things like getting out of my head and doing it right but also if I need help ask for help.”

At the end of last season, she was named the Defensive Player of the Year for the Dallas Athletic Conference. Jones currently leads the conference and is ranked 11th in the nation in digs per set.

Jones was also named the NJCAA Volleyball Defensive Player of the Week on Sept. 16.

Jones is from Splendora, just north of Houston. At 5 feet, 6 inches, she isn’t the tallest on the court, but she makes up for it with her commitment and attitude.

Jones has lived her entire life in the gym. Her mother, Jennifer Jones, coached basketball, volleyball and track, and her father, Travis Jones, was an athletic trainer.

“My mom, she kind of coached everything. At one point she got to coach me too. It was a great time,” Jones said. “My dad was our trainer at our school, so he was always there watching our games. He would take me to games, stuff like that, so he was always making sure I was well for our games.”

When Crisp was recruiting for Eastfield, he visited Xcel Volleyball Club, where Jones was playing.

“When I came to visit (Eastfield) it just really caught my attention, because the teams were doing so well and the dynamic just seemed so great,” Jones said. “I was like, ‘This is the place I want to be.’”

Kailey O’Neal, who is Jones’ teammate and roommate, said Jones’ competitiveness carries over to the team.

“She wants to play to win,” O’Neal said. “She wants to play for the team. She plays for everyone else, not just herself, so I think that’s a good strength of hers. And she’s a fighter. No matter what, no matter if she’s tired, she’s always going hard.”

Jones’ job as a libero is to promote ball control, give passes to her teammates and be involved in the serve-receive pattern during games. Her other job on the court is to lead her team.

“My role as the captain is to make sure if anything’s going wrong that I can help them and get to the bottom of what’s happening,” Jones said.

However, Jones and the Harvesters are off to a rough start, with a record of 1-10.

“It’s been a little difficult but I’m trying to stay positive,” Jones said. “The teams we’re playing should beat us because they are bigger schools. But we just have to keep pushing so that when we get to our conference, we can play the teams in our division and be ready for it.”

Crisp said Jones is vocal and takes charge, but that she is too hard on herself.

The adjustment to college life for Jones has come with a lot of new responsibilities and difficulties.

“This is the first time I’m living on my own and having to pay rent and get my groceries cooked for myself,” she said. “It was a big change.”

Jones said she knows her family is still with her even though distance separates them.

“My parents come support when they can,” Jones said. “My sister is the most likely to come because she lives the closest.”

Jones said she plans to move to a four-year university and play volleyball. But if it doesn’t work out, she plans to pursue a career in education at Tarleton State University.

“It’s my dream, but … it doesn’t happen for everybody,” Jones said. “But it is my dream, and hopefully this year [we will] go to the national tournament.”