Harvesters bounce back after canceled season 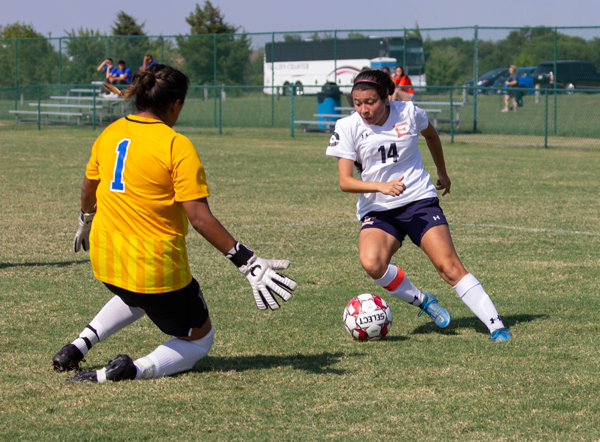 Laisha Garcia dribbles the ball beside the goalie during a game against Jarvis Christian College on Aug. 26. Photo by Rory Moore/The Et Cetera

One year after having their season canceled, the Harvesters soccer team has shown promise this year with some early wins against regional opponents Cedar Valley and North Lake to land a 2-5 record.

Last season was canceled because Eastfield didn’t have enough players to compete due to the COVID-19 pandemic.

Head coach Paul Tate said he recruited players from Dallas, Houston and East Texas during the offseason to finalize a roster of 24 players with 18 newcomers and six returning players.

Although the Harvesters have been able to get some wins, Eastfield lost some games early in the season against higher division teams.

“It was kind of confusing in the first games,” said fresh- man midfielder Andrea Marentes. “We didn’t know how to play together. Now that we know each other, we can play off each other a lot better.”

The Harvesters got their first win of the season in a 1-0 match against North Lake on Aug. 31.

Marentes scored the winning goal in the first half, while goalkeeper Stephanie Torres saved five shots on goal to secure Eastfield’s victory.

Tate said he decided to make a strategic change during the game by moving Marentes from midfield to forward.

“That kind of gave us more opportunities to turn the ball and get some shots off,” Tate said. “That really helped. We had her moving around the field, and she played great.”

Tate has also integrated some newcomers like forward Sierrah Richter into the starting lineup.

“We’re growing each practice and each game,” Richter said. “We are getting better and closer, but it’s going to take time to get there.”

Eastfield got their second win of the season against Cedar Valley in a 7-0 blowout on Sept. 7.

Marentes and Richter both scored two goals, while Angelina Muñoz, Julitha Mwamvua and Jacqueline Solis each scored the other goals and Torres saved three shots on goal to secure a win for Eastfield.

“We were all super pumped,” Marentes said. “It kind of brought us closer. We’re all pushing ourselves to be better.”

But the victories against Cedar Valley and North Lake only counted toward the Harvesters overall record, not their region record, which determines seeding for the district tournament. The winner of the tournament then goes on to play at nationals.

Eastfield’s regional opener is Sept.21 against Brookhav- en, who is ranked among the top 10 in the nation along with Richland and Mountain View for the week of Sept. 7.

“Getting those wins is really just building our confi- dence to go up against those stronger teams,” Tate said. “We know we can do it. We can play against anybody.”

The game against Brookhaven will be a huge test for Eastfield’s new team.

“I’m confident now that we can give them a tough battle and we can come out with the win,” Marentes said.

Basketball star gives back to community