Justin Lonon plans to use experience, connections as college’s chancellor 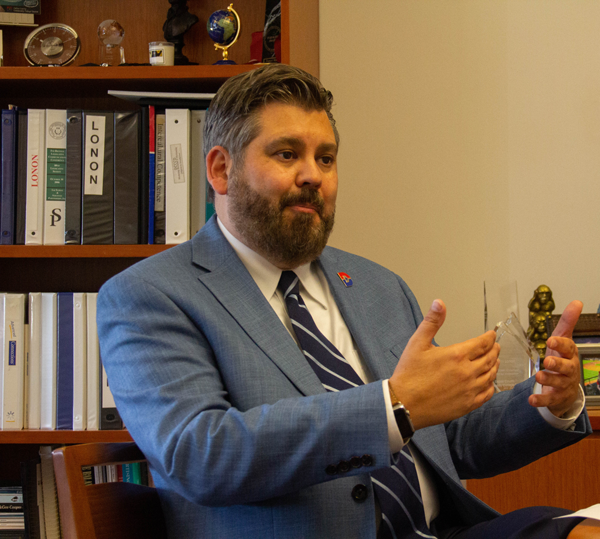 The board of trustees voted for Justin Lonon to replace current chancellor Joe May after May retires on Aug. 31, 2022. Photo by Rory Moore/The Et Cetera

Chancellor elect Justin Lonon is preparing to build upon the legacy of his predecessor Joe May and help students break down barriers to success.

Lonon, who will be the eighth chancellor of Dallas College, is set to take over the reins after May retires on Aug. 31, 2022. In the meantime, he continues in his role as executive vice chancellor and will gradually transition into his new role over the next year.

The seven institutions of the Dallas County Community College District consolidated into one college in June 2020. Lonon said he is excited about the direction the institution is going and believes it puts Dallas College in a better position to serve students and the community.

“That people recognize that this is a place for all, wherever it is that you’re trying to get to in your dreams,” Lonon said. “That people see that we have a path for them, and that the community views us as the anchor institution.”

Lonon, a native of Mountain Home, Arkansas, came to Dallas in 1997 for an internship with former Dallas mayor Ron Kirk. After the internship was finished, he stayed on as Kirk’s press secretary and campaign spokesman.

Lonon said he loved the street-level problem solving that was part of his job at Dallas City Hall.

“I like the ability to help people on their journeys,” Lonon said. “Even my work back then, when I could help in some small way — somebody didn’t get their trash picked up that day … or whatever — and they wanted to call City Hall, and I could help facilitate getting that problem solved.”

In 2005 Lonon joined Dallas College as the executive director of public and governmental affairs. That role gave him the opportunity to influence policymakers on behalf of community college students. He took over his present role of executive vice chancellor in 2015.

He said one of his proudest accomplishments as executive vice chancellor was crafting legislation for Dallas College’s first bachelor’s degree. The program was approved by the Texas Higher Education Coordinating Board, and the Bachelor of Applied Science in Early Childhood Education and Teaching will be rolled out this fall.

May said he is looking forward to seeing what Lonon will accomplish in the role of chancellor.

“With a great handoff to someone like Dr. Lonon, I’m stepping aside with confidence that we’ll see those initiatives completed,” May said.  “And frankly, build upon them and make them even better than I would have done. So he’s a great leader, and I think a great choice for Dallas College.”

When not in the office, Lonon focuses on his family. He and his wife Tonya frequently attend Baylor University football games with their daughter Karissa, now in her junior year at the university.

He also describes himself as a “car guy” who likes to tinker with old cars and participate in amateur car racing.

“That kind of gets the heart pumping,” he said. “To get on the track and hammer down.”

Lonon is the longest-serving member of the Dallas College executive team. He served under former chancellors Jesus Carreon and Wright Lassiter Jr.

Matt Hinckley, president of the Eastfield Faculty Association, said Lonon will bring continuity as well as an insider’s perspective to the chancellor’s role based on the relationships he already has made with community and civic leaders through his work at Dallas City Hall.

“His network is already right here,” Hinckley said. “And frankly, it’s been Dr. Lonon who has been Dr. May’s right arm in building the local connections.”

Lonon said one of his priorities will be expanding Dallas College’s baccalaureate programs. In addition to the degree in early childhood education, Dallas College has legislative authorization to offer four more.

Lonon said the other four have not been chosen yet, but a Bachelor of Applied Technology is under consideration since there is such a high demand for technology jobs in the Dallas area.

“These things are obviously hugely important,” Hinckley said. “It’s going to be a tremendous opportunity for so many students. Frankly, it’ll be a really good opportunity for many faculty.”

Lonon said another goal will be the implementation of the $1.1 billion bond project. The bond was approved in 2019 but was tied up in a lawsuit until December 2020. The money is designated for expanding and improving Dallas College facilities.

Lonon said he realizes that the transition to Dallas College was difficult for some, and he wants to help employees see the benefits that Dallas College can offer as one institution.

“Change is tough,” Lonon said. “And so I’m hopeful about my ability to lead through that, and for employees especially to see what we’re building through Dallas College for the betterment for students and for the community. I know that’s not going to be easy. I know that as an institution there are morale issues and concerns within some pockets of the organization that we need to focus on.”

Lonon said employee engagement will likely include forums and surveys to better understand employee concerns and develop strategies to address those issues.

In addition to building on programs Dallas College already has in place, Lonon said he hopes to create a program that would assess students for skills or previous learning experiences that could be turned into academic credits. He said he wants to make education as accessible as possible.

“I was privileged to get to take part in our graduation ceremonies that we had [in June],” Lonon said. “And so you think about over 11,000 students that, because of what goes on at Dallas College, are now on a better path. And I feel the weight of that commitment.”