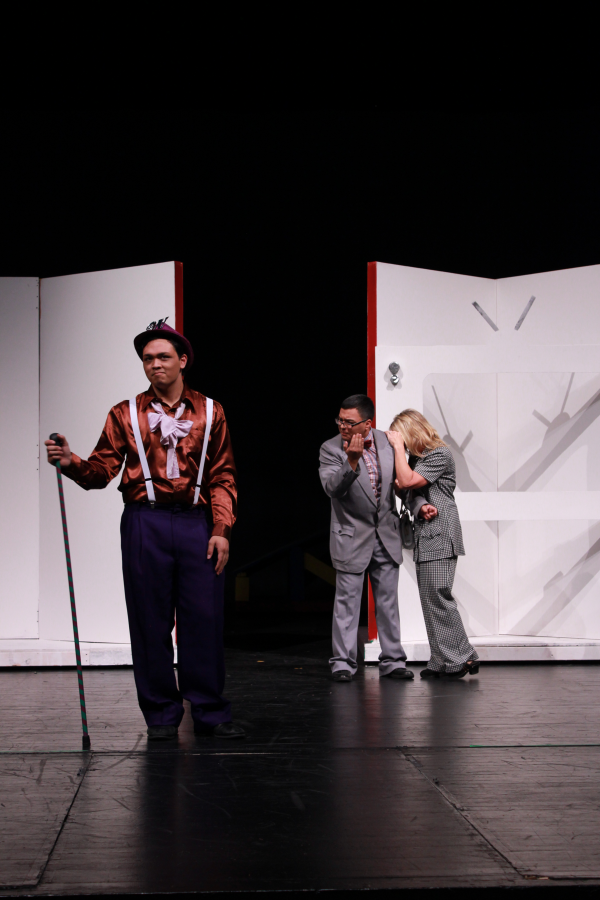 By Claudia Guerra
Violet Beauregarde sits in the audience with her mother, clutching her golden ticket and waiting for her chance to see Willy Wonka and his famous candy factory. She’s normally a gum-chewer, but when she heard about the contest, she switched to chocolate. Now she’s back on gum.
The naughty Violet, played by Lauren Stevens, later steals Wonka’s newest gum invention that wasn’t quite ready and sticks it in her mouth. Soon she begins to change colors and blow up like a giant blueberry as the audience laughed.
The scene was one of the highlights of the Harvesters Theatre Company’s opening night performance of “Charlie and the Chocolate Factory” on Nov. 29.
Wearing an inflatable jumper underneath her clothing gave the illusion that Stevens actually turned into a blueberry, and helped bring the performance to life.
The actors were able to hold together their accents throughout the performance, and there were few mistakes. The costumes were interesting, and the Oompa Loompas were too cute for words. With green hair and orange faces, they were hard to miss.


Narrators Monica Lira and Zach Cooper explained each story line before the scenes so the audience wouldn’t be lost. The descriptions were a bit long and could have been louder.
Willy Wonka, played by Lucas Haupert, looked confident in his purple suit and top hat. Portraying a character like Wonka, who is a bit mad, isn’t easy, but Haupert made the audience laugh with his witty delivery.
Inside the factory, children dropped like flies due to their bad behavior. Augustus Gloop, played by Richard Everts, fell into the chocolate river after Wonka tells him not to drink from it. He doesn’t listen and is sucked into the pipes in the river.
Veruca Salt, the spoiled princess played by Marissa Walden, thought she could have whatever she desired, including one of Willy Wonka’s squirrels. They attacked and threw her down a passageway.
Charlie, played well by Conner Gunnels, was the last one standing, winning the prize of becoming Wonka’s assistant.
The play was spectacular and has us looking forward to the next production, “Hairspray,” in the spring.
Delete Image
Align Left
Align Center
Align Right
Align Left
Align Center
Delete Heading