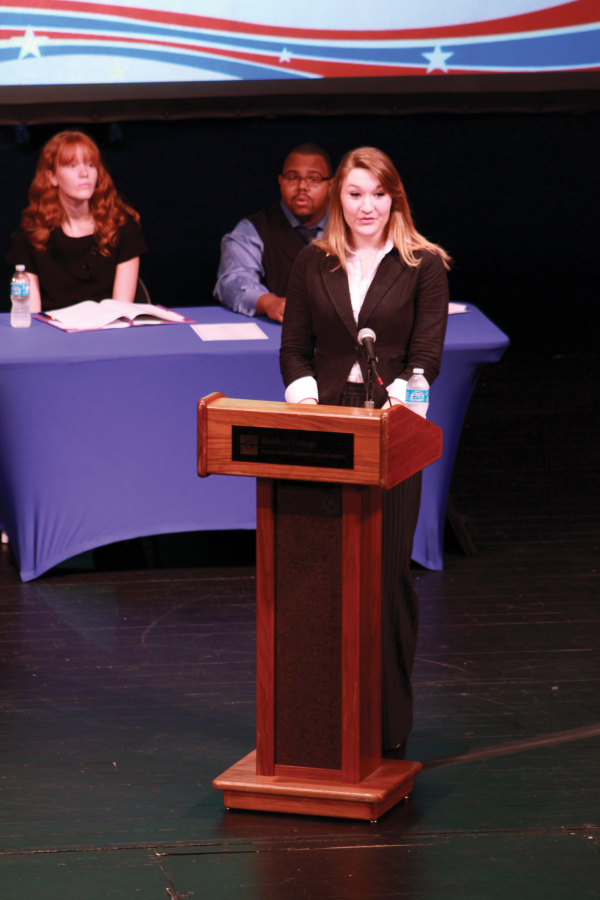 
By Keturah Jones
Students and faculty gathered in the performance hall on Nov. 1 to debate who would be the better candidate to lead our country, Mitt Romney or President Barack Obama.
Student debaters Ginny Morris and Gregory Garcia represented the Republicans. Sara Vincent and Floyd Clifton represented the Democrats.
The debaters were asked about their party’s views on the issues of same-sex marriage, war expenses, the economy and health-care reform.
The debate was moderated by Dr. Glynn Newman and speech professor Courtney Brazile. It began with two-minute opening statements by the debaters, including quotes from each party.
“If you roll up your sleeves and if you’ll work with me, we will win this election again,” Vincent said, quoting Obama. “We will finish what we started and remind the world why we, the United States of America, are the greatest nation on Earth.”
Garcia opened with a promise to the audience.
“My ultimate goal is to leave you more well-informed than when you came in here,” he said.
The first question to the debaters was how each candidate would fix the economy and get Americans back to work.
Vincent broke down Obama’s stimulus package and admitted that there was still much work to be done.
Garcia rebutted, claiming that the stimulus package “is a broken window fallacy on steroids.”
The second round of questions tackled the issue of immigration. Clifton explained how the Dream Act through Obama’s platform would benefit both the taxpayers and the illegal immigrants who already live in the U.S. but are currently getting benefits “under the table’”
Morris emphasized the importance of securing our borders.
“The next family that comes across may be a family seeking safety and a place to raise their kids, or it may be a terrorist or a drug lord,” Morris said. “We just don’t know.”
Morris said another four years of Obama’s leadership would ruin the country. Then she encouraged the audience to vote.
“You may not think that your vote counts, but it does,” Morris said. “It’s your right, please don’t miss out.”
Clifton said if Romney is elected president, the rich will get richer and the poor will get poorer.
The event ended with the debaters receiving a standing ovation.
After the event, audience members participated in a poll about who won the debate. The Democrat debaters received 62 percent of the vote while the Republican debaters took 17 percent. Eighteen percent of the voters were undecided.
Delete Image
Align Left
Align Center
Align Right
Align Left
Align Center
Delete Heading