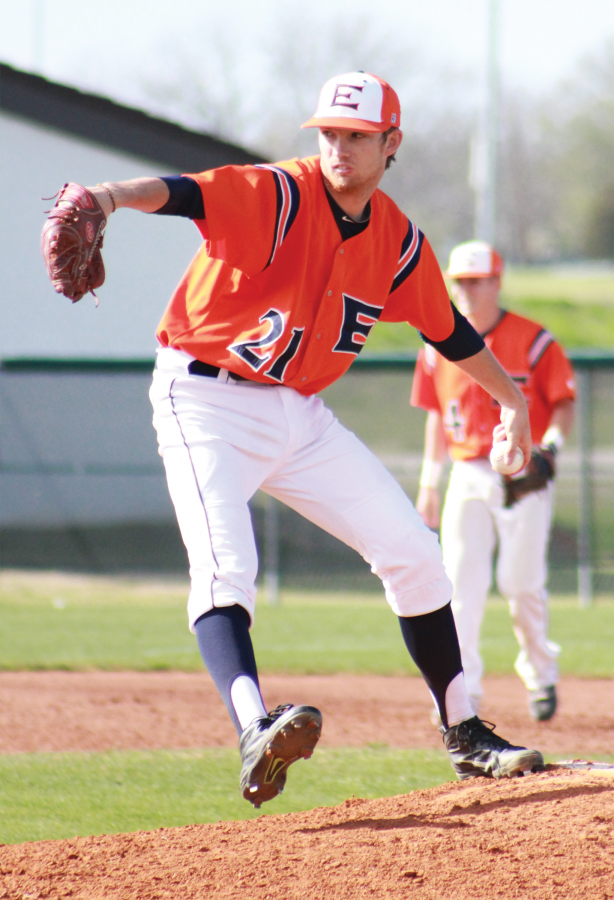 
By Jason Samuel
The defending NJCAA Division III World Series champions are looking for a repeat this year. In fact, Eastfield is seeking its fourth national championship in the school’s history.
“We have a good shot at it this year because of our experience, and we know what it takes to win,” sophomore outfielder Conner Tobias said.
The Harvesters, who are ranked third in the latest national poll, have a record of 31-15 this year, including a conference record of 19-5. They have four regular-season games left before the postseason starts May 4.
“Our goal is to go back-to-back, but we are still focusing on the games we still have left in the season,” Tobias said. “We have to finish out this season before we start thinking championship.”
The Harvesters’ offense has been strong this season, scoring double digit runs in 14 games so far.
Hestand Foster has led the way, hitting .393 with four home runs and 30 RBI. Tobias is hitting .363 with 11 stolen bases, 34 RBI and 42 runs scored. Pitchers Joe Mills, Miguel Saavedra, Blake Oliver and Scott Lane have combined for 19 wins.
“They have a great team this year, and I feel they have an even better shot at winning the championship because of their experience,” broadcast major Marco Romo said.
While the players have been key contributors to Eastfield’s success, coach Michael Martin has also played a role in the championships. Martin was named the NJCAA Division III National Coach of the Year after last season’s title.
“It was a great honor and experience to win,” Martin said. “I enjoyed the trip to California, but most of all the players get the credit for putting in the extra hours of practice and working as hard as they always do.”
The Harvesters have 15 sophomores who will be graduating this year, so defending their championship is vital.
“It is very important for us to defend this championship for our players that are leaving because I would like for them to leave on a good note,” Martin said. “We get every teams’ ‘A’ game, so it will be that much harder for us because every team knows that the Harvesters won it last year.”
The World Series will be held May 19-25 in Tyler.
Delete Image
Align Left
Align Center
Align Right
Align Left
Align Center
Delete Heading