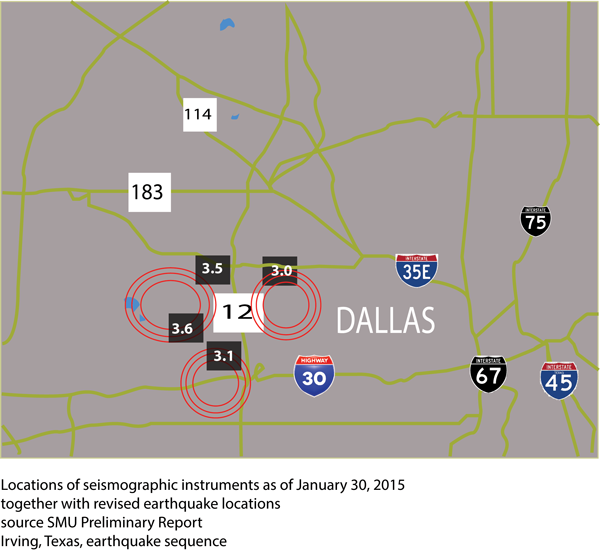 By Karina Dunn
A 3.6 magnitude earthquake occurred near the old Cowboys Stadium on Jan. 7. With tremors extending to Mesquite, the earthquake was the largest of several to catch the attention of Texas seismologists last month. For weeks, experts had no definitive answers about its cause.
“The public is confused,” Sandy Hampton, administrative director of Upward Bound, said. “We need more accessible information.”
Hampton was working upstairs in N-building on Jan. 7 when she heard the ceiling tiles shift. A few of the folders on her desk fell out of place. She said she heard the earthquake before she felt the building move.
“It sounded like someone ran into the building,” she said.
It was not until she heard the news reports that Hampton realized the jolt she felt was an earthquake. She researched fracking and Texas earthquakes online, but found many of the studies provided insufficient information.
“The reports are so dry… I wish [experts] would be more forthcoming with their research,” she said.
On Feb. 6, experts released the results of their early investigations. Researchers identified the source location of the earthquake as a “2-mile fault line near the Trinity River,” according to the Souther Methodist University Preliminary Quake Study.
Critics of fracking have suggest it as a possible answer. Fracking, short for hydraulic fracturing, is the process of injecting a mixture of water, sand and chemicals into the ground to extract oil and gas.
“The fracking itself is not usually a likely cause in earthquakes,” visiting scholar Daniel Murphy said. “It’s usually the disposal [of the mixture.]”
Murphy, who teaches historical geography at Eastfield, suggested that fracking could be a cause of earlier earthquakes in the area around 2008, but it may not be the cause of most recent ones.
While researchers continue to investigate the cause of the earthquakes, local gas wells remain an area of interest. However, SMU seismologist Brian Stump stated in a press conference that the wells they are viewing are not disposal centers.
Hydraulic fracturing itself occurs in stages: drilling, injection — or the actual fracking extraction — and disposal of wastewater.
Murphy explained that the disposal of waste left over from the water mixture can cause fractures underground, which could lead to a boom in the earthquake activity known as seismic swarm.
“[Drillers] keep what they can reuse and inject the [waste] into a salt water disposal well,” Murphy said. “There are fewer [disposal wells], and this is what actually causes the earthquakes.”
Proponents of fracking maintain that the process is safe and beneficial. Researchers have said they are still looking for concrete answers.
Cardiacsonography major Vanessa Gonzalez did not feel the earthquakes, but wants to learn more.
“I have not heard much about them, but it would be nice to have [better information], she said.
Most studies available are performed out-of-state. However, they show that earthquakes can have far-reaching effects, which is why Mesquite residents felt the 3.6-magnitude earthquake.
A person’s location at the time of the earthquake can make her more likely to feel a far-reaching quake.
“If you’re on the second floor, you might have felt it because the building itself might actually start to shake a little bit,” Murphy said. “When you design buildings to be resistant to earthquakes, you don’t have so much side to side [motion].”
Because of the rarity of seismic activity in Texas, few buildings are built to withstand earthquakes. No evidence suggests a large magnitude earthquake in the near future of North Texas.
According to Earthquake Country Alliance, there are precautions people can take to protect themselves and their property in case of a major incident.
If inside during an earthquake, duck underneath a desk to shield yourself from falling objects or a collapsed ceiling. If you are outside, get inside a car, which will absorb the shock. To prepare beforehand, residents can secure moveable furniture, such as bookshelves, and have a disaster plan.
Delete Image
Align Left
Align Center
Align Right
Align Left
Align Center
Delete Heading