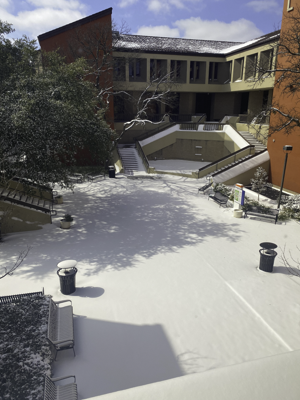 Dallas College facilities suffered some damage from the winter storm that brought snow, ice and freezing temperatures to North Texas the week of Feb. 14.

Chancellor Joe May said two facilities were impacted the most.

The El Centro Campus A building had four floors that received damage from burst water pipes. The repairs are expected to take about a month, May said at the Feb. 25 town hall. He said the upper floors can still be used while repairs are underway in the rest of the building.

The B building at Brookhaven also had some HVAC issues because of the storm.

May said there were a few other minor repairs that needed to be made but did not say which campuses those were on. The repairs were not extensive and were able to be taken care of over the weekend following the storm.

“Other than that, we are just in remarkable shape,” May said.

May said the campus police and facilities teams were in the buildings during the storm and got water turned off in time to prevent more damage.

Dallas received 4 inches of snow during the storm, according to the NBCDFW weather report. The temperature in Dallas on Feb. 16 was minus 2 degrees Fahrenheit, the coldest day in over 70 years.

All 254 Texas counties were under a winter storm warning, and the freezing temperatures and power outages wreaked havoc on buildings all over the state.

Over 4 million Texans were left without power as the Electric Reliability Council of Texas instructed utility companies to institute rotating outages in an attempt to take some of the strain off the power grid. In many cases the power outages lasted for two or more days.

By Feb. 17, more than 550 Texas public water systems had also reported disruptions due to the storm. Residents of several North Texas cities, including Mesquite, were told to boil water before use to prevent illness from contamination.