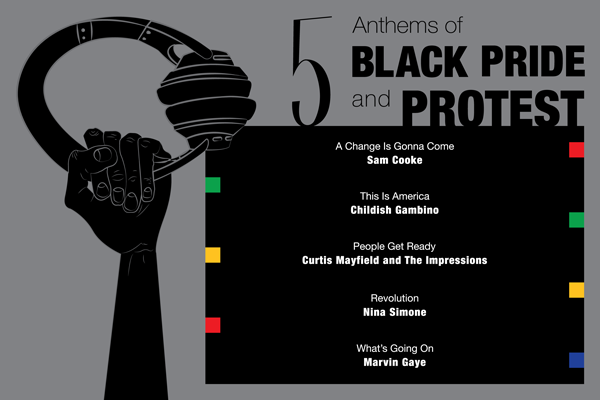 For generations, Black musicians have been sharing powerful stories and experiences through song. Whether with simple three-chord blues songs or complicated and improvised jazz melodies, they’ve told every story there is to tell from heartbreak to poverty to racism. But one message rings prominently in the undertones of every note.

Now, in the wake of the Black Lives Matter movement, this age-old message rings louder than ever before. It’s time we listen to the common theme from modern to classic music and remember that the revolution has only just begun.

“A Change is Gonna Come” by Sam Cooke

“A Change is Gonna Come” originally appeared on Cooke’s 1964 album, “Ain’t That Good News.” The song has been covered by multiple huge musicians such as Aretha Franklin, Otis Redding and Aloe Blacc. It was inspired by various personal events in Cooke’s life, like being turned away from a whites-only motel in Louisiana. He tells the story  of a man born by a river “and just like the river [he’s] been running ever since.” Each verse breaks the heart and explains the effects of racism on a single man. However, Cooke maintains optimism in the face of persecution when he says, “It’s been a long time coming, but I know, a change is gonna come.”

“People Get Ready” by Curtis Mayfield and The Impressions

“People Get Ready” was released as a single in 1965 and later became the title track from the “People Get Ready” album. Martin Luther King Jr. called the song the unofficial anthem of the Civil Rights Movement and often used the song to get people marching. The song keeps an easygoing pace which makes the message all the more powerful. Mayfield sings “there’s a train coming” in reference to cultural change and there’s no baggage required. He says plainly “There ain’t no room for the hopeless sinner who would hurt all mankind,” because one day they’ll have to answer for their crimes.

“Revolution” was written in response to the Beatles song of the same name and was released as a single in 1969. Sadly, the Beatles track wasn’t as popular as Simone believed it would be and she mentioned her disappointment about this on multiple occasions. At the peak of the Civil Rights Movement and less than a year after the assassination of Martin Luther King,  Simone speaks plainly and with power as she often did in her music and personal life. She says, “I’m here to tell you about destruction of all the evil that will have to end,” as she calls for the end of a corrupt and bigoted system with the powerful line, “The only way that we can stand in fact is when you get your foot off our back.”

“What’s Going On” by Marvin Gaye

“What’s Going On” is the title track of Gaye’s eleventh studio album, released in 1971. The album as a whole is considered a concept album and tells the story of a Vietnam veteran returning home to witness suffering and injustice. Gaye starts this song by explaining several sad truths that still affect the Black community today, like the fact that 50 years ago they were protesting about brutality and we still are today. With crystal clear notes he sings, “Brother, there’s far too many of you dying,” but with every verse he offers optimism and hope with a voice that could soothe even the most discriminatory of hearts. He explains the need for a peaceful revolution built on love and understanding when he says “For war is not the answer. Only love can conquer hate.”

“This is America” by Childish Gambino

“This is America” was released as a single in May of 2018. As one of the most controversial and heavily discussed songs of the year, with an equally shocking music video, people have devoted hours to explaining all of its hidden meanings. Gambino makes a brutal and shocking statement on racism and gun violence with the simple yet effective hook, “This is America.” The music video was directed by Hiro Murai and is laced with references to the 2015 Charleston shooting and makes a statement about how entertainment is often used as a distraction from political issues in the United States.