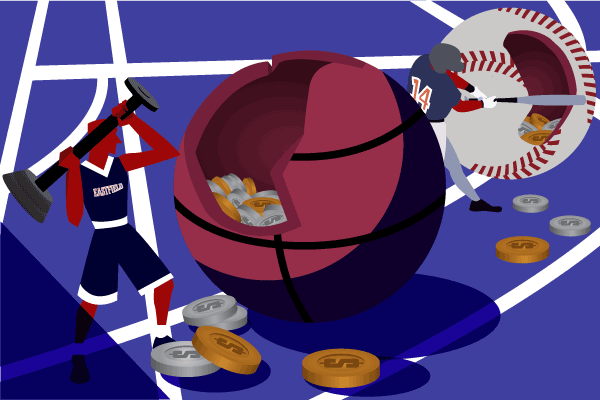 “Show me the money,” the famous quote from the movie “Jerry Maguire,” is ultimately what the  majority of college athletes want. According to cnbc.com, a poll taken in September 2019 showed an overwhelming 80% of all students and 83% of athletes agreed that college athletes should be paid if their image is used for purposes such as selling merchandise.

I believe all college athletes should receive some sort of compensation, considering the cash they bring in for these schools. In 2019 the University of Texas at Austin brought in $223.9 million, and $156.9 million of that came from football.

Where does $156.9 million go? Coaches get a percentage. A chunk goes to academics and scholarships as well, and a whole bunch is poured into the facilities and stadiums.

One place it does not go is into these player’s pockets.  Schools are making millions of dollars off these college athletes and all people have to say is, “They’re going to school for free.” Well that is not enough.

I say this because I was once one of those student athletes. I played football at Oklahoma State University on a full scholarship.

I’m not saying we should pay these athletes millions of dollars, but even a small amount can make a difference. What is a small amount? Well, that depends on how much the school brings in.

College football teams can have up to 125 players, but only give 85 scholarships. I say at least $2,000 a week is fair. You may think that sounds like a lot, but it is not.

If your jersey is selling in the student center, you should receive some sort of percentage. Five percent is good. Walk-on players don’t receive anything because they haven’t been awarded athletic scholarships.

That is pennies to these schools.

First, every athlete that steps on campus comes from a different place and has a different background. When I arrived at Oklahoma State, I was an 18-year-old from Mesquite with a kid on the way. From the start my mind was on money.

There were times when I felt overwhelmed. I was getting acclimated to a new environment and there was a new level of responsibility weighing on me.  How was I supposed to provide for myself and a kid?

Going to school full time and being a full-time athlete is hard and time-consuming. How do I work? How do I eat?

Fall season for college football players is the hardest time of the year. You have school as well as the season, on top of early morning workouts and later practices. The grind athletes go through is real and can be overwhelming for some.

Some student athletes really don’t have much. I have seen athletes not go back home for long periods of time because they did not have the funds.

I have seen players struggle with keeping food in the refrigerator. For instance there was an athlete who had siblings who went right up the road to Langston University. He shared everything with them, and food was the number one thing.

I have seen players with absolutely no family at all. No one to call for support mentally, physically or financially.

It’s time for big time programs to start paying college athletes. The hard work and dedication that players bring to these programs are not always seen. The amount of cash that is generated yearly is insane.

It’s time to show these athletes their real worth.

—Al’Darius Thompson is a contributor and a kinesiology major.