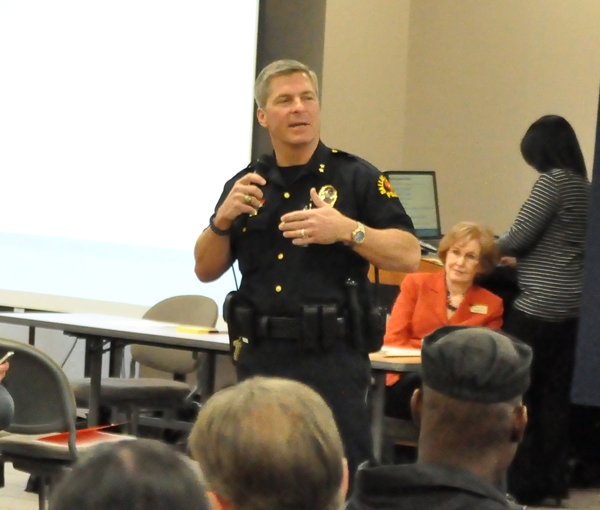 
By Robert Burns
In light of the recent crimes committed on campus, college administrators and police plan to implement new security measures such as adjusting officer patrols to increase their visibility and stationing officers in the Pit during peak hours.
Officials held a safety forum on the main campus Nov. 19 and repeated it Dec. 1 at the Pleasant Grove campus.

At least three violent crimes have taken place on campus this semester. An employee was charged with sexually assaulting a student in a locked music room, a man was cut with a box cutter after a fight broke out at an Eastfield DART bus stop and an intruder attacked two campus police officers after attempting to break into a room late at night.
Additionally, a campuswide warning was issued just as the semester began after a woman was found severely beaten in an alley three blocks away.
The forum outlined future plans to increase personal safety on campus.
“We are investigating the possibility to have Eastfield police academy have cadets serve an internship on our campus so that there are more eyes and ears,” President Jean Conway said. “They won’t be doing actual police work, but they will have a police radio and they can contact police with what they have seen and heard.”
The college will also compare the number of police on staff to other urban colleges of similar size to determine if Eastfield needs to expand its police force.
In addition, increased emphasis will be placed on scenario-based training for emergency preparedness.
The campus’ social media outlets will also be reporting non-emergency disruptive incidents, and a new email list will be created for students to receive this information as well.
It is expected that Eastfield will receive a centralized computerized locking system for exterior doors by January.
Smaller measures include posting room numbers on the interior of doors so professors who change rooms frequently can report their location efficiently in the event of an emergency, grouping evening and weekend classes within the same building to make it easier for the police to patrol, adding emergency procedure cards to all rooms except private offices and installing emergency alert buttons in faculty computers.
Students and faculty are an important component of campus safety as well.
“See something, say something,” Chief of Police Michael Horak said. “If they see something they believe is out of the ordinary, then they need to go ahead and call. … Police officers look at suspicion different than the normal person because they are trained to what is normal or abnormal activity. If they see something that could lead them to go and engage with that person, then they will.”
Horak said students should report suspicious behavior to the police by first reporting a description of the person and then any suspicious activity that students see.
Descriptions should be thorough and include unique identifying features such as tattoos, facial hair or jewelry.
Students should then report what the suspicious person is doing as well as if they have a weapon.
Students should not approach the suspicious person themselves, even if they have military training, and should call the campus dispatch at 972-860-4290 instead of 911 because the campus police can respond more quickly than Mesquite police.
After Horak explained how to properly report suspicious activity students and faculty were invited to ask questions and give suggestions that might be implemented into the new safety procedures.
A common concern was safety when traveling to a vehicle in the parking lot, especially at night.
Students and employees can request to be escorted to their cars by calling dispatch, and if they are waiting for a ride, Horak suggested that they wait by the police station.
Alberto Martinez thought the forum was informative and should be a regular occurrence
“Honestly I think they are doing a good job,” he said. “I think they should do this once a year so they can keep up with instances of crime.”
Conway said she wants to prioritize safety on campus.
“We just want this campus to be safe for students, so they can come learn,” she said. “If students are worried about their safety, they’re not going to be free to be creative and to learn like they need to, so we’ve got to make sure safety is just a given.”