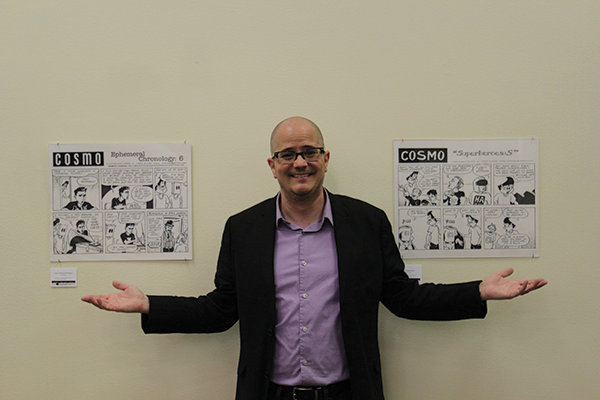 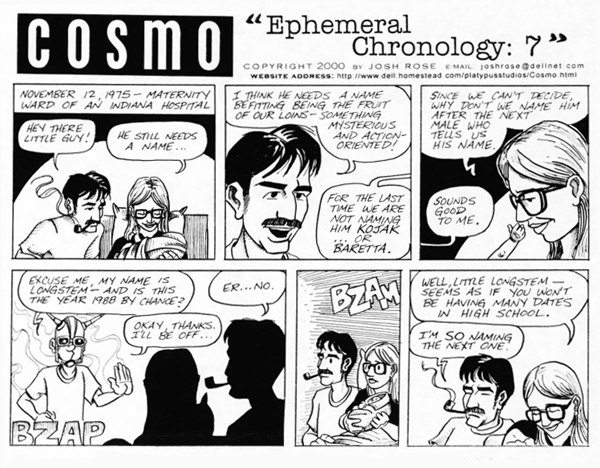 The Et Cetera’s life and arts editor Sidney Murillo sat down recently with cartoonist and former adjunct art professor Josh Rose at the Atrium Cafe in the Dallas Museum of Art to talk about his inspirations and experience in the art community.
Rose’s long-running comic strip “Cosmo” is on display in the library and ties in with the theme of this year’s common book. He portrays himself and his friends alongside the main character and longtime brainchild, Cosmo.
Q: You’re a cartoonist! But what exactly do you do?
A: My day job? Well, up until last May I was an adjunct professor. I taught art history classes at Eastfield, Brookhaven and UNT. But since May I’ve worked here at the Dallas Museum of Art. I’m the manager of docent and teacher programs. I also manage teacher workshops and stuff like that.
Q: What about cartooning?
A: Cartooning is something I haven’t done recently. I want to. It’s a time issue. When I was in college for both my undergrad and graduate degree, I drew the strip “Cosmo.” It was a weekly strip in a number of (publications). I drew it for my school newspaper, and then after I graduated I drew them for the entertainment newspaper in grad school.
Q: What made you want to become a cartoonist?
A: I’ve always loved cartoons. I was a comic book reader as a kid. I’m an avid comic strip lover and animation fan and have always wanted to dabble in it. When I was in high school I had my first experience with the school newspaper. I was drawing these topical one-panel strips, and I remember playing around with this one character, which would later become Cosmo.
Q: How did you develop the actual character?
A: I remember being in high school just doodling one day. I created this odd-looking character with big eyes and ice cream cone shaped hair. I liked the look of him and I just started drawing him everywhere. I didn’t really have much of a formation of him until my senior year, which is when I drew my first story with him. The concept then was that he was this weird looking character that sort of represented teenage life. Slowly, I started surrounding him with cartoon representations of my real life friends. All of my high school friends made an appearance. After I graduated, they actually became the cast.
Q: Do you still keep in touch with them?
A: Oh, yeah! Actually, when I posted the pictures from the Eastfield reception on Facebook, I tagged them and they thought it was pretty cool. I had a lot of fun forming those characters.
Q: How would you describe Cosmo’s personality?
A: He has changed over the years. Early on, he was basically me. But by the time I started drawing him at Texas State (University,) I had introduced myself as a character in my comic. The idea was to have them both together. Cosmo is more like me back (in high school.) He has a lot of faults. He’s real goofy, but he’s fairly confident in himself. But my character is me to the Nth degree. It’s not really an accurate description, but it’s me blown up. He’s funny and quirky.
Q: What are your inspirations?
A: Oh gosh, for cartooning I’m going to have to say Berkeley Breathed, who drew “Bloom County.” It’s weird, because as big of a comic book fan that I am, my own work has always kind of been forced into the newspaper strip model. I love that model. It’s not dead by any means, but it’s certainly becoming more of a lost art. But certainly, “Bloom County” is a big inspiration to me. It’s the style and the dialogue and how he fits humor in his dialogue, as well as an expansive cast of characters. The more I look at what I was doing and what he was doing in his comics, there is obvious parallels.
Q: Do you have a goal for your work?
A: I always want them to laugh, but I also want to make them think. I’m a big fan of funny stories that can turn and become thoughtful and serious. I like unexpected twists. I’m really working hard incorporating that, but for the most part I just really want to make people laugh.
Q: What’s your drawing process like?
A: I prep everything and draw it out using non-photo blue ink. If you look at my original strips I made, you can see a blue line. That’s all the sketching I would do and the reason for that is because I ended up really liking the non-photo blue for my comics. When you make copies and Xerox the comic, none of the light mistakes show up.
Q: Who’s your favorite superhero? Make it your top three.
A: These are the questions that keep me up at night. I’m a really a big fan of the Flash. I love Spider-Man. Lastly, my favorite is a funny little character called Ambush Bug.