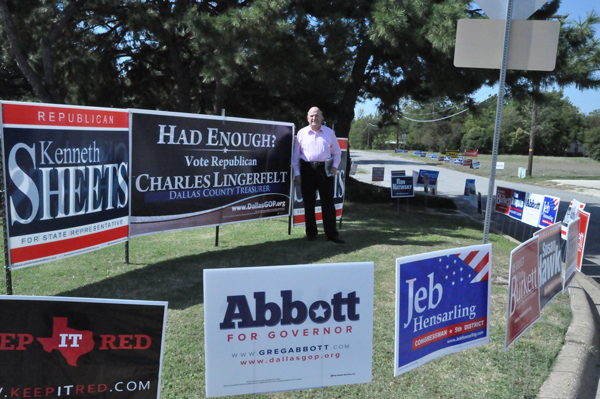 GUILLERMO MARTINEZ/THE ET CETERA Early voting will occur Oct. 20-31 in many locations around Dallas including Lakeside Activity Center in Mesquite, where Charles Lingerfelt was campaigning for Dallas County treasurer.

By Andy Carrizales
After a 14-year reign, Rick Perry is stepping down as governor of Texas, and this November, a new governor will be headed to the Governor’s Mansion. With the opportunity to elect new leaders, some students at Eastfield are ready to hit the polls.
In a recent unscientific Et Cetera poll conducted during the month of September, 36 students ages 18 through 39 answered queries about their voting habits and views on government.
Young adults should vote, 63.8 percent of the participants agreed, but only 38.8 percent said they were planning to vote.
“A lot of people are not voting,” said government professor Ja’net Chappelle.
Chappelle, who is conducting a case study on voting with her government classes, said that potential voters find it difficult to learn about issues and candidates.
“It’s a little cumbersome to get the information,” she said. “Most of [the voters] are like ‘I’m not doing all this research.’ ”
Jose Marquez, a computer engineering major, agreed that students should be informed and partake in the electoral process.
“A lot of the decisions that are happening are impacting students,” Marquez said. “And a lot of us, including me, don’t know what’s going on.”
He also said that the major concern with voting is that it takes time for change to be implemented.
“People want instant gratification,” Marquez said. “Voting is not instant. It takes too long for something to actually happen.”
Of the 36 participants, seven were unsure whether they would vote, while 15 outright said they will not be participating in the process.
One of these students is Joanna Wright, a political science major.
“I think voting is a joke, because only 5 percent of our votes actually count in all of Texas,” she said. “I just don’t think people should vote because we go through the Electoral College, which means that the Republicans and the Democrats at Congress decide who wins, not us.”
Even though the Electoral College does influence the presidential election, it does not hold any impact over local elections.
Chappelle, when confronted with students who share these views, tries to educate them on the importance of their participation.
“If you’re looking at 30 percent of the people voting, how is it that your voice would matter?” she said. “If we get at least 50 percent people voting, your voice would matter at that point. The more people you have, the more difference you can make.”
She also said that the people who refuse to vote are still participating on the process.
“You are voting when you don’t vote,” Chappelle said. “You just kind of gave the other person your voice.”
The Nov. 4 elections are the general elections, where voters choose their representatives for Washington and a new state governor.
“It’s vital for them to be aware of this one,” Chappelle said. “These are the people who are supposed to be representing you every day. These are the people who you’re putting in office.”
Professor Elida de Obaldia, who teaches engineering and physics, conducted voter registrations in the Pit last month.
“Any election is important to vote,” de Obaldia said. “Especially when you are electing the locals, because you can really influence those.”
De Obaldia and Chappelle agreed it was difficult to get students interested in politics, but it helps to make them aware of how government affects them.
“Financial aid is through legislation government,” Chappelle said. “Not too long ago, the Pell grant was on the chopping block to get cut for some people, and that’s the only funding some students have to go to school. … Then you have people who have student loans.
“Our Congress was trying to not allow an extension for us. Unfortunately with the job market the way that it is right now, people need an extension before they can pay their student loans because their jobs are not making them enough money to pay back their loans.”
Even Eastfield operates under the control of elected officials.
“This school, the DCCCD, this would not exist,” Chappelle said. “Community colleges in this perspective are state-owned, so if they want to cut it, they can.”
As revealed by the survey, students feel most worried about economic issues, with 30.5 percent naming it their top concern. The economy was followed by equality and foreign policy, both at 25 percent. Students also listed Communism, the justice system and “America trying to be big brother.”
“It’s good to know that the economy is something that [students] are looking at because that is one of our greatest issues, and also income inequality,” Chappelle said.
Unregistered voters can visit the Texas Secretary of State website and check the requirements to become a registered voter. The deadline for the Nov. 4 election has passed, but new voters will be eligible for May’s municipal elections.
“It’s not very tedious,” Chappelle said. “You can do that in two seconds.”
In the words of English professor Dr. Elizabeth Huston:
“If you don’t vote, you can’t complain, right?”
Delete Image
Align Left
Align Center
Align Right
Align Left
Align Center
Delete Heading