'They’re afraid to go to the doctor sometimes': Immigrants’ uncertainty increases during pandemic 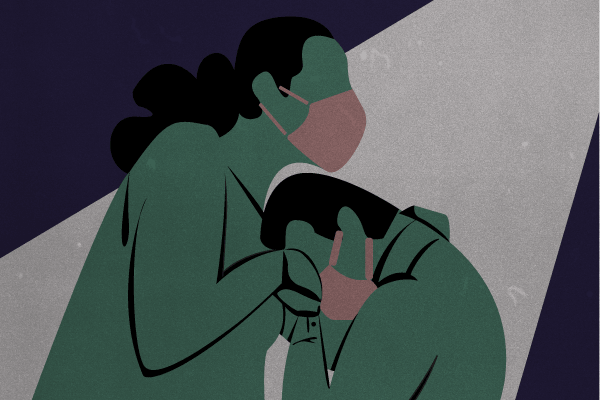 Carlos Rovelo had just finished his shift on a recent Monday afternoon at World Central Kitchen in Santa Fe, New Mexico, helping distribute food to families affected by the COVID-19 crisis. Everything was put away, and Rovelo was outside ready to leave when a woman driving a minivan pulled into the parking lot.
“I’ve been lost. I couldn’t find this place,” the woman told Rovelo in Spanish. Rovelo could see three small children in car seats in the back.
“She was just desperate,” Rovelo said.
Rovelo went to his car and pulled out the leftover meals the chef had just given him to take home and gave them to the woman, a single immigrant mother from Chihuahua, Mexico.
“This mother is not so much concerned about COVID-19,” he said. “She’s so afraid that [she’s] not going to be able to feed these kids.”
Rovelo, a government professor at Eastfield and political analyst with Univision and Telemundo 39, said anxiety is high in the immigrant community. The coronavirus has added another layer of complexity to the uncertain existence undocumented immigrants in the United States already faced due to the political climate.
“They are also highly concerned about deportation,” he said. “Preceding this crisis there was already an immigration crisis, so this has just added to the emotional, mental [stress] of the immigrant.”
During his time in office, President Donald Trump has made numerous proposals to curb illegal immigration in the United States.
[READ MORE: DACA opens door to education for staff member]
In July 2019 he gave authority to the Department of Homeland Security to expedite the deportation of undocumented immigrants who have been in the United States for less than two years without giving them access to an attorney or a hearing before an immigration judge.
Trump is also trying to end Deferred Action for Childhood Arrivals, the Obama-era program that protects young people from deportation who were brought into the United States illegally by their parents. The Trump administration has challenged the program as unconstitutional, and the Supreme Court is expected to issue a ruling this month.
As of Sept. 30, 2019, there were close to 700,000 active DACA recipients nationwide, according to United States Citizenship and Immigration Services.
Edwin Romero, a 2012 Eastfield graduate, came to the United States with his family from Michoacán, Mexico, when he was 6 years old.
[READ MORE: Column: DACA recipients should be protected from Trump]
As a teenage undocumented immigrant, he worked low-paying jobs in the fast-food industry. In 2013 he qualified for DACA, which allowed him to get a job as a paralegal with the immigrant advocacy group RAICES.

Romero said his own job has not been affected by the coronavirus, but he knows others who are not as fortunate.
“They lost their jobs … and they didn’t qualify to receive stimulus checks because of their status,” he said. “[There are] a lot of resources and things that are just harder for undocumented people to access.”
The Coronavirus Aid, Relief, and Economic Security Act, signed into law by Trump on March 27, provided stimulus checks for up to $1,200 per person to supplement the income of those who had lost jobs due to COVID-19.
The payments were off-limits to immigrants without a social security number, including immigrant families with one U.S. citizen spouse or U.S. citizen children.
The CARES Act also designated more than $6 billion for colleges and universities to use as emergency assistance for students affected by the coronavirus.
Education Secretary Betsy DeVos said the money was only for students who are eligible for federal financial aid, which excludes undocumented students and those with DACA.
The Dallas County Community College District has found another route to help undocumented students who may be struggling financially because of the pandemic.
“The DCCCD Foundation has other funds that we are using for these students when they apply,” Valerie Cavazos, Director of Marketing and Communications for the DCCCD Foundation, said in an email Monday.
For more information on how to apply for emergency resources, students can visit
dcccd.edu/emergencyaid.
Undocumented immigrants who did not lose their jobs due to coronavirus layoffs often work in jobs in the food industry, agriculture and meat packing that put them at a higher risk for being infected by COVID-19.
“Undocumented people are not going to be hired in an office where they can work from home,” Romero said. “Because these are the only jobs they’ll get hired for, they have to risk their lives and go to work because [otherwise] they’re not going to make a living for their family.”
[READ MORE: Living in Fear: In wake of El Paso shooting, Hispanic residents worry about their safety]
Romero said inadequate health care access is another barrier. Many undocumented immigrants do not have health insurance and they cannot afford a private physician. That leaves them in a vulnerable position because they don’t know where to go if they need to get tested for COVID-19.
Many are hesitant to go to a doctor because of their immigration status.
“They’re afraid to do anything,” Romero said. “They’re afraid to go to the doctor sometimes because they’re scared somebody is going to ask them for a social security number.”
DACA recipients, like Romero, do not have permanent legal status within the United States, but they do have social security numbers and work permits. Many are on the front lines in the fight against COVID-19.
On March 30, the Center for Migration Studies reported that 10,000 DACA recipients work in hospitals and 2,000 in nursing care facilities. Close to 15,000 work in the manufacturing sector, which includes pharmaceutical, medical equipment and cleaning products.
[READ MORE: ‘It’s something that drives me continuously’: Alumna fights for undocumented students]
Even though these DACA recipients are considered essential workers, they might all lose their jobs in the near future if the Supreme Court rules the program unconstitutional.
“Right now, we are hoping for the best but preparing for the worst,” Romero said.
In preparation, RAICES is offering free renewal services to those whose DACA permits are about to expire, hoping to buy them a year or two more of protection even if the Supreme Court rules against them.
Romero said his marriage to an American citizen makes him eligible for legal permanent residency no matter what the court decides, but it is hard knowing not everyone has that option.
Still, he believes immigrants shouldn’t focus on what will happen if DACA is taken away, but rather continuing the fight to succeed in this country.
“Before DACA, we were all still here, we were all still fighting for a better world,” Romero said. “We know that somehow we are going to figure something out to continue living and surviving because that is what we’ve been doing this whole time.”
https://eastfieldnews.com/2018/03/07/i-think-of-it-as-a-nightmare-for-daca-students-uncertainty-continues/
Delete Image
Align Left
Align Center
Align Right
Align Left
Align Center
Delete Heading