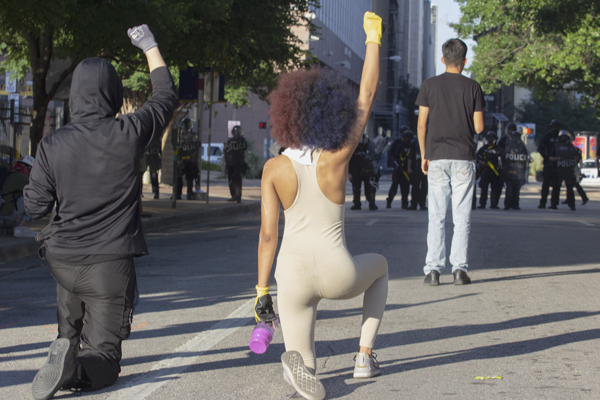 Protesters raise their fists in the air while taking a knee on Jackson Street near South Lamar Street in Dallas on May 30. Photo by Skye Seipp/The Et Cetera

Protests continued in Dallas on Saturday after the killing of George Floyd in Minneapolis. Police fired tear gas, pepper bullets and nonlethal rounds or rubber bullets at protesters throughout the day. Nearly 100 arrests were made.
The protests initially began at City Hall in the afternoon, but the crowd was split up by police and forced into downtown. Police then began trying to split up groups of protesters throughout the city, but demonstrations continued into the night. Some eventually made their way onto I-35E near the I-30 ramp but were moved off by police.
— Skye Seipp