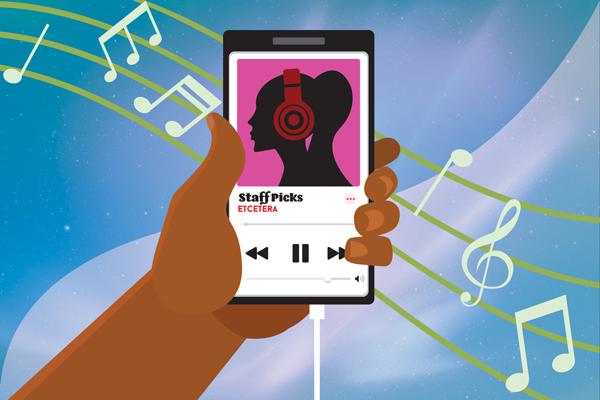 Editor’s note: Staff picks is a new series that provides readers with suggested shows, movies and other forms of entertainment staff of The Et Cetera recommends people check out while sheltering in place.
With the entire country on lockdown, many of us are left wondering how to spend all of this free time on our hands. Some people like to binge-watch Netflix or YouTube, others prefer to play games or talk on the phone for hours. Music lovers are in luck though as some great new music has dropped in 2020. So, if you’re looking for some new songs to add to your playlist, here are some quarantine vibes to listen while stuck at home.
— Sazoun Grayer

Arguably the best album that has dropped in 2020 comes from Travis Scott protégé and JACKBOYS member Don Toliver. Toliver burst on the scene with good features on Scott’s track “Can’t Say” off his 2018 album “Astroworld” and on JACKBOYS song “Had Enough” with Migos members Quavo & Offset. On March 13, Toliver released his debut album “Heaven or Hell” and it did not disappoint. On this project, Toliver really showcases his unique voice and style. Just like Scott, he is a versatile artist. He can rap over a heavy bass beat and he can sing over a beautiful melodic one. The album has party tracks like “No Photos” and “After Party”, as well as chill love songs like “Euphoria” and “No Idea”. There’s a lot to love about this album; it’s perfect for car ride vibes or just relaxing and fading into space as the sounds fill your ears.

Lil Uzi fans waited two long years for new music. Since his last album “Luv is Rage 2” dropped in 2017, fans have been teased time and time again about “Eternal Atake” coming out. Finally, on March 6, the wait was over. Lil Uzi’s 18 track project features clever wordplay to go along with hard-hitting beats. The production on this album is really well done; the combination of instruments and sounds come together and allow the lyrics to just flow over them. It’s easy to get lost in songs like “Prices” and “Secure the Bag” that have such catchy tunes. To make it even better, Lil Uzi wasn’t finished there.

Just a week later, Lil Uzi released 14 more songs and dubbed it the sequel to his 2016 mixtape Lil Uzi Vert vs. The World. The album serves as a deluxe version of Eternal Atake. LUV vs. The World 2 is only a step-up from Eternal Atake, even more fast-paced bangers and great beat production. Lil Uzi also collabs with many talented artists like Future, Young Thug, Chief Keef and Lil Durk, just to name a few. My personal favorite on this album is “Money Spread” featuring Young Nudy. It’s impossible not to get hyped while listening to this song; the lyrics flow so well with the hard-hitting beat and in no time you’re bobbing your head along to it. “I Can Show You”, “Leaders” featuring NAV and “That Way” are a few others to give a listen.

“After Hours” – The Weeknd

Next, we have “After Hours” from The Weeknd released on March 20. His fourth studio album brings us chilling, dark and mysterious R&B vibes. The lyrics contain content from toxic romanticism to the inner struggle of faith. This album doesn’t fail to give a thrilling experience to listeners. The Weeknd described the album poetically, “You can find love, fear, friends, enemies, violence, dancing, sex, demons, angels, loneliness and togetherness all in the After Hours of the night.”

This album is for the R&B lovers. Aiko released “Chilombo”, her beautiful and meditative third studio album on March 6. The project possesses many themes: love, heartbreak, individuality. Every song tells a story, and it’s done in the way that brings out the beauty in every voice featured. Aiko got help from great singers like H.E.R., John Legend, Miguel and Ty Dolla $ign as well as hip-hop artists Big Sean, Future and Nas. “Chilombo” is the perfect album for anyone in love or going through relationship problems, and it’s one of the best projects to come out this year.

On February 28, Atlanta rapper Lil Baby dropped his project “My Turn”. Baby has come to be known for making radio hits and catchy hooks, but on this album we see a pure, down and dirty side of Baby. He showcases his skills with fast-paced lyrics over well-produced beats. The album features fellow rap artists Gunna, Future, Lil Uzi Vert and Lil Wayne. “Get Ugly” and “Heatin Up” are my two favorite tracks on the album. They are also the first two songs and really give the album a hot start as you go down listening to every track.

This is a highly underrated album so far. Hip-hop producer Zaytoven creates head-bobbing beats behind the keys while the trio of Lil Keed, Lil Gotit and Lil Yatchy combine their unique skills and personalities to produce a very interesting sound. Some good tracks to listen to off the album are “Reloaded,” “G5,” “Fashion Nova Men,” and “Rockstar Lifestyle.” “Fashion Nova Men” featuring Foolio is by far the best track of this project, though. The beat has a chill vibe that mixes well with the drums and bass to create a catchy tune. It’s near impossible to sit still while listening to it.

Just when his fans thought the days of Fetty Wap were long gone, he comes back with a Valentine’s Day project “Trap & B”. For those that were fans of him during his golden days back in 2014-2015, this album will remind you of the catchy, soulful sounds we were used to hearing from Fetty. This is another project that is really underrated this year and definitely deserves more attention. Tracks “Questions” and “Reasons” are relaxing, smooth love songs that you can’t help but dance and sing along to. I recommend playing this album while spending time with that special someone.

Hip-hop legend Chief Keef added to his prolific discography with the release of part four to his Glofiles series on March 6. Keef fans have come to expect the aggressive hard-hitting style that he raps with and it’s no different on this project. When it comes to making hype songs, not many do it better than Keef. “G Unit,” “Ignorant” and “MCM” are some of my favorites on this album.

Nebu Kinizia, the artists behind hit singles “Ransom” and “Gassed Up” teamed up with Lil Tecca for this one. “Can’t Deny” came out on March 20 and it’s the perfect combination of what both artists bring to the table. Kiniza sings the melodic hook while Tecca spits hard lyrics over the chill beat. It’s a really good song to listen to while relaxing at home.
https://eastfieldnews.com/2020/04/03/staff-picks-quarantine-and-chill-with-this-selection-of-movies-shows/