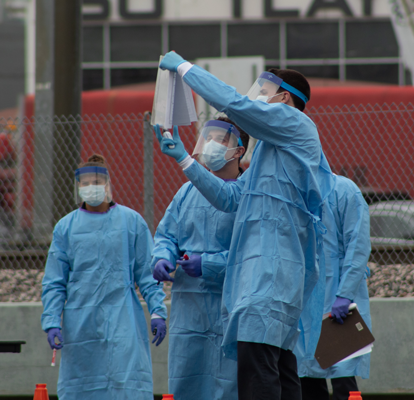 By SKYE SEIPP
@seippetc
Dallas County will be extending its shelter-in-place order, Judge Clay Jenkins said in a press conference today. The initial order was set to end this Friday, and he did not specify how long the extension would last.
Eighty-two cases of COVID-19 and two deaths were reported in Dallas County today. It was the biggest single-day increase yet, bringing the total to 631 positive cases, 26 of which are in nursing homes and 13 deaths. Mesquite currently has 19 positive cases.
[READ MORE: Interactive COVID-19 dashboard]
Jenkins called on the federal government to increase the number of coronavirus tests by 400 for the two sites at Ellis Davis Field House and the American Airlines Center. Both sites are capped at 250 tests per day.
“This is critical,” Jenkins said. “We need visibility into what’s happening in our community. I know there are plenty of people in the federal chain that want us to have it.”
He also asked the federal government to not shut off funding for testing sites on April 10, calling it a “bad decision.” And said there is bipartisan support in Congress to overturn the date.
Jenkins also said the county is running low on personal protective equipment and called on able local businesses to begin producing them. He said companies that do this will be paid for it and can open if they are not currently an essential business.
[READ MORE: District extends spring break extra week, moves classes online]
He added that he has called on a bipartisan congressional delegation in North Texas and any member of congress in Dallas to get more PPEs.
“We need PPEs, perhaps from other federal government sources so that we’ll have the time to build our PPE capability here,” Jenkins said. “That is going slower than I would like. I know everyone is working hard, but we are having hospitals that don’t have the PPEs that they need.”
New orders will also go into effect at midnight for all testing sites in the county to release the number of COVID-19 tests given and positive results within 24 hours. System and county hospitals will also be required to release the total number of patient beds, intensive care unit patient beds and ventilators each day. These hospitals will also have to release how many are in use.
He also called on citizens to limit their visits to the grocery store.
“You really need to write a list. We just need you to go in there one time,” he said. “It’s not safe for you. It’s not safe for the workers there and the other people if everybody is crowding or just hanging out at the grocery store.”
[READ MORE: Coronavirus affects DCCCD]
Jenkins said citizens will be safer due to Gov. Greg Abbott’s essential business order today that closed workplaces across the state that are not considered essential until April 30. Abbott’s order also closed schools until May 4. Jenkins, along with other health officials and politicians, had been urging Abbott to release an order that was similar to Dallas’ shelter in place for weeks.
Abbott’s order did allow for religious institutions to continue services in person, but Jenkins revised that for the county, noting that places of worship will not be allowed to take place unless it is done remotely. He added that some local religious leaders have said they would allow churches without the proper means to conduct remote services to use their facilities.
“You are safer tomorrow than you’ve been for the last 10 days,” Jenkins said about the state’s order. “We can do this. But it takes the sacrifice of everyone.”
https://eastfieldnews.com/2020/03/31/federal-agencies-loosen-testing-treatment-regulations-to-help-fight-coronavirus/
Delete Image
Align Left
Align Center
Align Right
Align Left
Align Center
Delete Heading