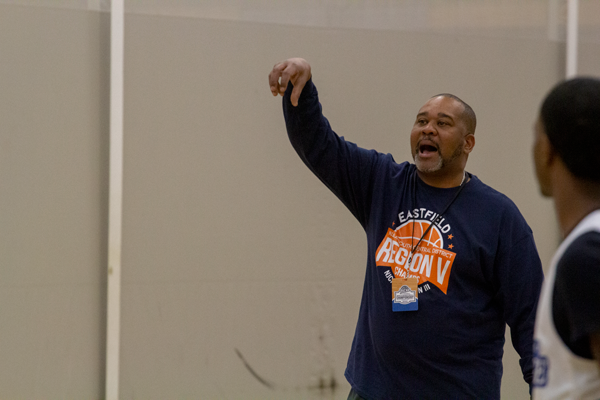 Head coach Anthony Fletcher runs over drills with players at the practice gym in Rochester, Minnesota. He has been telling players to “lock-in” all week. Photo by Skye Seipp/The Et Cetera

ROCHESTER, MINN — As the Harvesters get ready to play for a national championship, veteran head coach Anthony Fletcher still remembers the run in 2013 where he came within inches of his first title. The Harvesters had a great run in that tournament but wound up finishing as runners-up. This year, he looks to put that season behind him and bring the gold back to Mesquite.
“It hurt,” he said. “But you got to be a man about it and find a way to get back.”
He started off small as a graduate assistant coach in 1999 at his alma mater, Angelo State University. He came to Eastfield in 2001 as an assistant before taking an assistant coaching job at McLennan Community College. When the head coaching job at Eastfield opened up, Fletcher came back to his hometown and took over the program for the 2005-06 season. The basketball program was in trouble after letting go of their previous coach in the middle of the season and had to cancel the remainder of it. He was just 28 years old at the time.
It was a process to get the program back on its feet and it was a struggle for Fletcher in the early going. He spent his first few years trying to understand his philosophy and what he wanted to do as a coach. He also didn’t have much to work with. When he took over the program, he was only allowed to have one player from the previous coach’s tenure.

“Some of it was maturity as a head coach,” Fletcher said. “Some of it was experience. I think there were a lot of different factors. Some of it was starting a program over from zero.”
Slowly but surely, Fletcher began to have success. It took some trial and error and learning on the job, but he started winning more games. Things started to pick up for him around the 2008 season when the Harvesters started winning more games and inching closer to the top of the conference. In 2010, they finally won the Metro Athletic Conference title for the first time in nine years.
Since then, the Eastfield basketball program has thrived. Fletcher is second in all-time wins at Eastfield and earned his 300th win last year against Cedar Valley. He has helped over 100 players get to the next level and earn millions of dollars in scholarships. He has coached former NBA player Eric Dawson, some NBA G-League players, and professional overseas players as well.
Sophomore guard TaMarcus Butler says Fletcher still continues to make an impact on his guys to this day. Butler says that playing under Fletcher the past two seasons e thinks that winning this tournament would be huge for Fletcher, himself and everyone else on the team.

“He’s going to remember this forever. He might tell his grandkids [about] this and I’m going to tell my kids this, so I know it going to stick with him like its going to stick with everybody on this trip,” Butler said.
Fletcher’s run in 2013 was the closest he has been to a national title. He practically tasted it, coming up just six points short as the Harvesters fell 61-55 to Brookdale Community College in the national championship game. The loss was so disappointing that he didn’t watch the game footage for a whole year.
“When we lost it, my wife doesn’t cry a lot. She just doesn’t. After that game, she cried, and it hurt,” Fletcher said. “It hurt me because there was nothing I could do for her. I felt like I let her down.”
Since then, Fletcher has taken Eastfield back twice more, placing fifth and fourth in 2014 and 2016. Now here once again in 2020, Fletcher hopes to finally grab the title that has eluded him.
“It would be a special moment if that were to happen,” he said. “I’m excited.”
Assistant coach Antonio Richardson has been by his side for almost the entirety of Fletcher’s tenure at Eastfield. Richardson joined the staff in Fletcher’s second season as coach and has seen him grow from the young, inexperienced first-time head coach to now. Richardson has been there for the trials and tribulations, from not having many guys on the team at all to losing a national championship together. He’s been right there with Fletcher for all of it.
“It’s basically a brotherhood,” Richardson said. “There’s been times me and Fletch have been on the phone 2, 3, 4 o’clock in the morning trying figure it out and get it done. But I think over the years that’s why we’ve been so successful.”
As the Harvesters wait in anticipation of their first game on Thursday, Fletcher is doing what he can to make this trip the one that will bring him his first national title.
“It’s bigger than just us,” Richardson said. “It means a lot for the community, for Eastfield, for Dallas, Texas … I think we’re ready. It’s our time.”