The Et Cetera • May 7, 2014 • https://eastfieldnews.com/1787/news/wounded-warrior-project-helps-usener-adjust-to-civilian-life/ 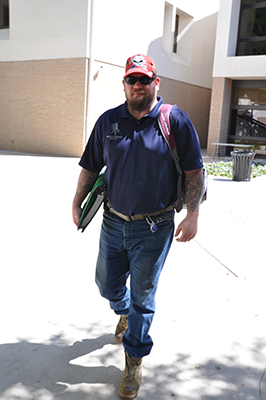 Army veteran John Usener, who is studying science at Eastfield, was selected to have his story told in a television documentary episode on MSNBC.


By EMMA HAHN
In February 2007, a bomb hit an Army truck full of U.S. soldiers on a recovery mission. John Usener, now an Eastfield College student, was inside the truck that day.
“I ended up being a human pinball,” Usener said. “I busted three of the four plates in my chest, took a huge chunk out of my helmet and shattered the protective eyewear I was wearing; thus the head injury, neck fusion, bad back and the partridge in a pear tree.”
Usener said he still has flashbacks to the explosion, but they are not nearly as bad as they used to be.
Usener, 36, who served as a U.S. Army sergeant until he was medically discharged in 2010, is studying science at Eastfield and working toward his associate degree. It hasn’t been easy for him to return to a normal lifestyle, but he’s had help.
An organization called The Wounded Warrior Project has given him the tools for success through its many programs. The project’s main purpose is to help veterans reintegrate into society.
“They use sports psychology, resume writing, working with colleges, and financial [help], Usener said.
“It’s like a mini boot camp. A friend of mine told me about it. He knew it was a resource that I needed, and he was right.”
Usener was one of several medically retired soldiers selected to have his story broadcast in a television documentary called “Wounded: The Battle Back Home.” The documentary is split into single episodes, each featuring a veteran and his or her challenges. The episode featuring Usener’s story, including footage shot at Eastfield, is expected to be broadcast on MSNBC in late June.
Usener’s injuries have posed many challenges in his daily life. He has difficulty balancing, and his migraines leave him in bed for days. Usener’s eyes were also damaged badly in the explosion, forcing him to wear sunglasses all the time to protect them from bright light.
“I’ve had quite a few lead foot experiences where law enforcement officers thought I was under the influence when I wasn’t,” Usener said. “Doing a field sobriety test requires a lot of balance, which I don’t have because of the injuries. Also, when they hit my eyes with their flashlights to judge pupil response, my eyes don’t react like a normal human being’s, so they automatically assume that I’m under the influence of something.”
Michelle Fields, Usener’s wife, said his injuries have also impacted her life. She tries to be there to support and help him during his trials.
“I have to retain more of the memory, to make sure he keeps up with his doctor’s appointments,” Fields said. “If I see him getting wobbly, I try and make sure that he doesn’t fall. When he has the severe skull splitters, he’s usually down for three to five days. It doesn’t matter what he takes; he has to be in a dark room and sleep until it goes away.”
Director of Student Life Judy Schwartz said she appreciates what that the Wounded Warrior Project does for veterans.
“I have a deep respect for our soldiers,” Schwartz said. “I appreciate the WWP for understanding the needs and wants of our wounded veterans enough to provide services, programs and activities that encourage and motivate our veterans to assimilate back into society and make positive contributions to our communities.”
The Eastfield campus carries a “veteran friendly” designation Schwartz said most veteran students where just want to be welcomed and appreciated, but also treated like normal students. She said Eastfield is working hard to grant these wishes.
Fields said she would recommend the Wounded Warrior Project services to any veteran who is trying to reintegrate back into civilian life.
“If I had millions of dollars,” Fields said, “I would give it to them, just because I believe that much in their cause.”
Delete Image
Align Left
Align Center
Align Right
Align Left
Align Center
Delete Heading