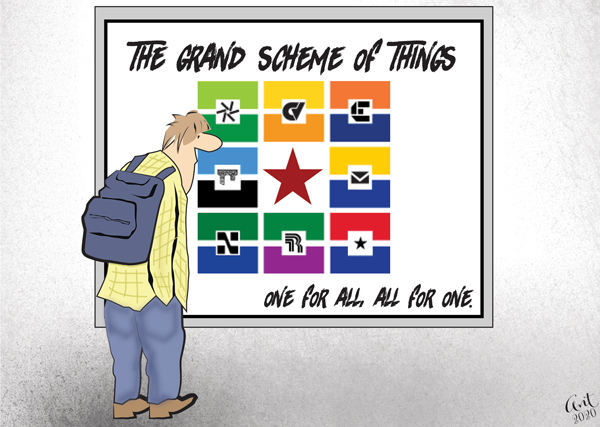 We support the Dallas County Community College District’s single accreditation initiative.
Students and the district have been negatively impacted by a separate accreditation system for too long.
In August, Chancellor Joe May announced his plan for the district to become “one college” by having all campuses be accredited together by the Southern Association of Colleges and Schools Commission on Colleges. This move was proposed to align the district on inconsistencies found at different campuses and will help swirl students — people who take classes at multiple campuses — graduate without having to meet the rule that forces students to complete 25 percent of their credits from one of the seven colleges in DCCCD.
There’s no reason students should have such a hard time drifting from various campuses, especially when campuses have different programs. The move to “one college” will address these issues and more.
The time for change is now.
Skepticism is understandable. An abrupt change of this magnitude isn’t easy, and there are not a lot of answers to questions regarding what these new academic structures will mean.
We want answers, but they’re not there and it’s nerve wracking.
However, if we put off change so the district could study every little issue that may arise from adding new administrative positions or having a different school structure, the discrepancies will grow.
Change shouldn’t be opposed, but rather championed at an institute of higher learning.
As the city of Dallas increasingly becomes a hub for tech giants, it’s up to the DCCCD to ensure the populace isn’t losing out on jobs and can meet the growing demand. Dallas had the second largest number of people in Texas move from out-of-state to its county in 2018 with 46,474 people, according to a recent report released by the Texas Realtors Association.
Office jobs in Dallas grew by 5.7 percent in 2019, a report by real estate firm CBRE found. That’s more than any other city in the United States.
The “one college” initiative is supposed to grow the DCCCD’s number of partnerships with Dallas businesses. This will propel students to upward economic mobility, which is necessary for a city that’s poverty rate was 20.5 percent and 14.2 percent for the county in 2018, according to the U.S. Census Bureau.
Both numbers are higher than the national average of 11.8 percent.
It’s up to the one community college system serving Dallas County to bring these numbers down. And that means transforming operations, like the accreditation system, that have been in place since 1965.
Then there’s the issue of campus identity.
The one college initiative isn’t some Orwellian nightmare that will force every campus to assimilate into an empty shell of lifeless classrooms.
No one at the district offices has made any remarks that suggest clubs, sports teams or student organizations like The Et Cetera are going away, and May has said campuses will keep mascots and sports teams.
Hanging on to little bits of pride does nothing but stop progression. Let it go.
District leaders owe this change to the taxpayers. After being awarded a $1.1 billion bond, that money can’t be wasted on upgrading deteriorating buildings while neglecting to fix internal problems.
The system has failed, and the revolution has begun. Embrace it.
Delete Image
Align Left
Align Center
Align Right
Align Left
Align Center
Delete Heading