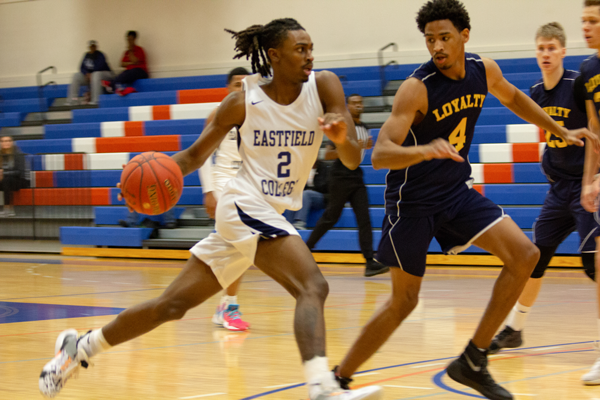 
The Eastfield basketball team is looking like a national powerhouse again.

The Harvesters are unbeaten through 13 games, including wins over Brookhaven and Cedar Valley, and have grabbed the No. 2 spot in the latest NJCAA Division III poll.

The fast start happened even though Eastfield was without starting guard Ta’Marcus Butler, who suffered a high-ankle sprain in preseason play and was out for about two weeks.

With his ankle literally “swollen all the way up to his calf,” as coach Anthony Fletcher described it, the team was left without a key piece. But Butler wasn’t worried about his team’s resilience because of the depth of their roster.

“They’re not going to falter,” he said. “Everybody can fill anybody’s shoes.”

He was right. While Butler was sidelined, Fletcher used a trio of players in his absence. Tyrese Davis, Kyndall Miller and Xavier Benson each had two starts.

Fletcher’s strategy was to use different combinations to develop his players’ confidence.

“It’s early. We wanted to put different people in different situations and see how they would respond and react,” Fletcher said. “When people start, it’s a prideful thing. It’s a pretty big deal. To give multiple people [the] opportunity to be a starter and get their name called out is a pretty cool deal. I think it boosts our morale a little bit.”

Butler has made a speedy recovery and has since returned to the lineup and playing well. In the seven games he has played, he is averaging 10 points, three assists and three rebounds.

The Harvesters have not only begun the season with perfection, but they’re doing it in a dominating fashion. They have beaten their opponents by more than 29 points per game and are averaging 105.5 points, besting their nation-leading 100 points per game mark from last year.

They are also rebounding, distributing and shot-blocking efficiently, averaging 50 rebounds, 21 assists and six blocks per game.

The season has kicked off on a promising note, but Butler knows there’s always room for improvement, especially on defense.

“We’ve been doing drills — help drills, defensive slides, all that,” Butler said. “We’ve been practicing every day, working on our defense.”

The team looks to continue its momentum during its six December games before starting conference play in January. Despite the Harvesters’ success, Fletcher wants to keep his players focused on the task at hand and not allow them to become overly confident.

“Without a doubt we can’t have a big head,” Fletcher said. “I think we do at times because of just the mentality of a young person, but that’s one thing we have to work on.”