Beyond the playbook: Former Harvester point guard, distinguished alumnus teaches excellence on and off the court 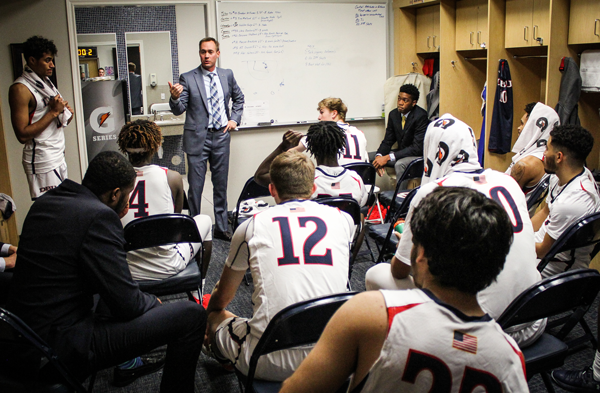 
It was the first game of 1994, and the Eastfield men’s basketball team was taking on the top-ranked NJCAA Division 1 Hutchinson Blue Dragons on their home turf in Hutchinson, Kansas. Eastfield’s eight-man team was outnumbered and outsized.

Freshman Blake Flickner, barely 6 feet tall and 135 pounds, had just been called into his first college game. Almost immediately he hit a 3-pointer. The next time down the court, he hit another. Excitement built among the fans as the rookie point guard helped the outmanned Harvesters squad make headway against a national power.

“Hutchinson was really, really good. [In the end] they beat us, but…we played with confidence and without fear and Coach Flickner, my dad, believed in us. That’s the way we approached every game and was what helped win the conference [later] that year,” Flickner said.

Today Flickner is the head basketball coach at Dallas Baptist University. He has led the Patriots to the NCAA Division II national tournament four times and has twice been named Heartland Conference Coach of the Year. In October he was awarded the DCCCD Distinguished Alumni Award for his achievements both on and off the basketball court.

“We work hard, and we try and do things with a high level of excellence and consistency, but it would be foolish to claim that it’s too much more than we’ve been blessed,” he said.

Flickner’s resume includes a stint as student manager under Hall of Fame coach Roy Williams at the University of Kansas and two years as assistant coach for the Naval Academy Midshipmen. From 1998 to 2001 he was the assistant coach at Eastfield under Mark Murdock.

Flickner came to DBU in 2005 to help start their basketball program. His players are known for good sportsmanship on the basketball court and a high standard of excellence in the classroom.

Some of them have gone on to graduate from places like Emory Law School and Southern Methodist University. One of his students now plays professional basketball for Team Copenhagen in Denmark.

“He knows his stuff, but it’s just very obvious that his priority is not winning games,” former player Armie Lewis said. “It’s making an impact on his players while they’re with him so they can go out and … make a difference.”

Flickner’s faith in Christ is what fuels his coaching.

“It’s huge,” he said. “It shapes everything and the way I see the world and understand what my purpose is and how to handle adversity…It’s impossible to separate that from who I am and what we do. It’s really at the core of my identity.”

Flickner’s family also plays a major role in his life.

He and his wife Mary have been married for 16 years. Their three children, Isaiah, 12, Ruth, 11, and Malachi, 8, have been involved in various sports, including basketball. The family enjoys hiking and playing board games together and are members of Matthew Road Baptist Church.

Flickner grew up in Garland. His father, Bob Flickner, was the head basketball coach at Eastfield for 23 years and still teaches physical education at the college. The family enjoyed basketball, but they always tried to keep it in proper perspective.

Flickner’s parents placed a high value on education and instilled in him  the importance of hard work, humility and balance.

His father tried to get him interested in tennis or golf, but those sports were too slow for him.

“I was extremely hyperactive as a child,” Flickner said. “I needed a high-energy sport, and basketball fit the bill.”

He started to play organized basketball at the YMCA when he was in third grade. By the time he got to ninth grade, he was hooked.

He played basketball throughout his high school years while maintaining consistently good grades.

“He was always a good student,” Bob Flickner said. “He worked hard in the classroom and took pride in his grades. He had a good work ethic.”

Flickner graduated from Garland High School at the end of 1993, a full semester early, so he could play basketball on his father’s team at Eastfield. During his time there the Harvesters won the Metro Athletic Conference and advanced to the national tournament in New York, where they finished in seventh place.

“[He was a] good teammate, good player, just a joy to have around,” Bob Flickner said. “It was neat to be able to spend time with him in that setting.”

After three semesters at Eastfield, Flickner went on to get a degree in business administration from the University of Kansas in 1998 and a Master of Arts in Christian education from Dallas Theological Seminary in 2001. In 2016 he obtained a doctorate in education from DBU.

In reflecting back on his college experiences, Flickner said his best times in the classroom were at Eastfield because of the interaction he had with his professors.

One professor in particular who had an impact on him was history teacher Bob Sharp.

said his was the because of the who “I admired his passion,” Flickner said. “He had a love for learning, history and people that was just contagious. He brought energy and he brought enthusiasm to the classroom.”

Flickner said he took a history class he didn’t need just so he could be in the classroom with Sharp.

Sharp frequently invited students to lunch and made it a point to build relationships with them outside of the classroom. He became a mentor to Flickner.

Flickner tries to tries to do the same with his players at DBU.

Lewis, who played basketball at DBU from 2007 to 2012, described Flickner as “genuine.”

“I have friends that have played on other teams and played at other schools for other coaches and they never have talked about their coach the way that I feel about Coach Flickner,” Lewis said.

Lewis was not planning on going into law when he started at DBU, but thanks to Flickner’s constant reminders to attend class and work hard, he excelled in school.

His strong GPA put him in a position to attend Emory Law School. He now works as a lawyer in Houston.

Flickner encourages his players not to put basketball on a pedestal but still strive to play their very best.

A dark blue banner emblazoned with white letters hangs on the left-hand side of the basketball gym at DBU. On it is the motto that Flickner wants his players to remember: Audience of One.

“It doesn’t matter what the fans in the stands think, or parents or girlfriends or anybody else,” he said. “We’ve got one audience. It’s God that we play for, it’s God that we live for and …we play to glorify Him.”