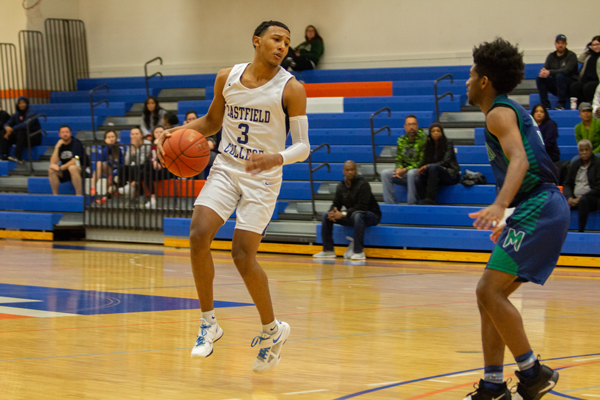 The Harvesters are ready to put last season’s heartbreaking 82-80 loss to Richland in the Region V championship game behind them and return to the national basketball tournament for the first time since 2016.

Entering his 15th season, coach Anthony Fletcher will once again rely on a fast-paced, high-scoring offense that averaged 100 points a game last season, the best in the nation. Last season, the team ended with a respectable 25-8 record, 6-4 in conference. They will try to improve even further this coming year.

The Harvesters will have to replace All-American Rashaun Coleman, who averaged 22 points per game, setting school record for total career assists and assist average in a season and ranking second in career points.

However, Fletcher said his team has a next-man-up mentality, and he believes his players are ready and capable to pick up where Coleman and the other graduating sophomores left off.

“This team kind of reminds me of the 2016 team that went to the national tournament because we’re smaller inside, so we have to work on different things with (this) group” he said. “At the end of the day, we’re always trying to win championships. Every year we have to replace guys. It hurts us a little bit, but we want to help our student athletes get to the next level. That’s the most important thing.”

Fletcher pointed to sophomores DaJuan Ridgeway and D’Angelo Smith as key pieces for the team this season. Ridgeway, a guard out of Little Rock, Arkansas, was all-region in 2017-18 while averaging 12 points a game, but he sat out last season. Smith, who is from Houston, was also an all-conference selection last year, averaging 10 points and five rebounds per game.

Ta’Marcus Butler is another returning sophomore who could make an impact, being versatile enough to play point guard, shooting guard and small forward. Now, as one of the experienced leaders for the Harvesters, he has some goals for the group on moving forward in the season

“That first game sets the tone. It lets everybody know where we are at. Depending on how (we play), it sets the tone for the team and builds our confidence,” Butler said. “As a team, we want to get better every day in practice. We want to win. We’re going to do everything we can and beat everybody in our conference. As a team we’ve got to communicate on the court and off the court and have fun. We have been practicing hard, going at each other, figuring out who can do what.”

He said the end to last year’s season was bittersweet but he sees that as motivation for the squad to get better moving forward. He knows that defense will be the key for the team this year.

“The offense is going to come to us, we’re going to score. We’re more worried about improving on defense. We’ve been doing drills, communicating all day, and (trying to understand) everybody’s role,” he said. “We know what we’ve got to do. We don’t want to lose [again] like last year.”

Since Fletcher came to Eastfield in 2004, winning and making postseason appearances have become expected for the team. The Harvesters have advanced to the national championship game twice during his tenure.

If the Harvesters are to make a deep postseason run, they’ll need to win a highly competitive Dallas Athletic Conference, including Richland. Eastfield went 0-3 against the Thunderducks last season. However, Fletcher said his team is ready for the challenge.

“They were better than us,” he said. “You play somebody three times and they beat you three times, they’re better than you. We fought and gave everything we had (that final game against Richland) and we had an opportunity to tie it at the buzzer, but the layup just rimmed out. It doesn’t matter if you win or lose a game. It never stops. It never ends. If you want to be successful, you don’t have the time to necessarily enjoy or get upset and shut down. It’s a grind and you have to keep grinding.”

Newcomer Mike Aranda, a sophomore transfer from a National Association of Intercollegiate Athletics (NAIA) school in Kansas, said the team is prepared to take the opposition head on.

“All of us are confident about this year,” he said. “It’s going to be a good year. We’re going to play hard every game, and we expect to win.”

The Harvesters have gone 5-0 since the season began on Nov. 4.