Far beyond the hype: Rap’s best artists of today 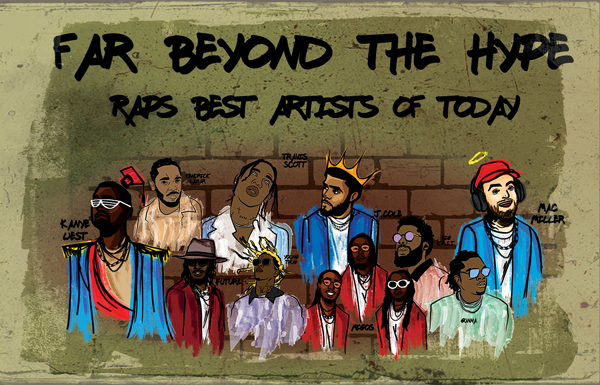 Who comes to mind when discussing the top hip-hop artists ever? Of course the usual suspects like Tupac and Biggie will be in this discussion. But other all-time greats like Rakim, DMX and OutKast could also be mentioned. I think everyone’s preferences would look a little different.
Recently, a hip-hop podcast called “The Brew” tweeted out a list of the “Top 50 Greatest Rappers of All-Time”. The list that resulted in a Twitter uproar of angry fans and members of the music industry.

The commenters had several big complaints. For one, no female artists were listed. One-hit wonder and now outspoken hip-hop critic Joe Budden was listed at No. 3. And a number of highly regarded top artists were either ranked horribly or absent from the list altogether.
I agree that this list included a truly ridiculous sequence of artists. Upon seeing the list for the first time, I honestly thought it was a joke or a troll.
So I decided to create my own Top 10 rankings while acknowledging that, because I’m 18 years old, my list caters more to the present-day era of rap. So here’s my ranking of todays greatest artists..
1. Kanye West
Best Song: Heartless
Best Album: Graduation

One word wouldn’t be enough to describe the eccentricity of Kanye West. Almost everyone knows something about him, whether it’s his interruption of Taylor Swift’s acceptance speech at the 2009 Video Music Awards or his marriage to one of the most iconic women of pop culture ever, Kim Kardashian. However you may feel about the person Kanye West, the artist is an undeniable legend. A jack-of-all-trades — rapper, singer, producer and businessman — West has produced some of the most legendary masterpieces of rap history such as “College Dropout,” “808s and Heartbreak” and “Yeezus.”
It’s hard to choose just one best album because all of them are equally amazing. His music has been so innovative and influential on rap culture. He is an absolute master of sound production. He knows exactly what combinations of rhyme and sound will create the perfect result. Just one listen to any of his albums, and you’ll understand the true gift this man possesses. He has helped shape what hip-hop has become and has influenced many of today’s top artists.
2. Kendrick Lamar
Best Song: B**** Don’t Kill My Vibe
Best Album: Good Kid, M.A.A.D City

Being a native of Compton, Lamar was passed the West Coast rap torch by Bay Area OGs like Dr. Dre. The so-called “king” of hip-hop is one of the most talented and creative rappers we’ve ever seen. Only five albums in since his “Section 80” debut in 2011, Lamar has quickly solidified himself as one of the most important figures in rap today and of all-time. He has a plethora of classics and a Pulitzer Prize to back it up.
Lamar is a lyrical genius, and he effortlessly produces groovy, soulful beats that time and time again embody the definition of rhythm and poetry.
3. Future
Best Song: Where Ya At (featuring Drake)
Best Album: Future Hndrxx Presents: The Wizrd

Future is the definition of “new-school rap.” He may not be as lyrically sound as the likes of a Kendrick Lamar, but his use of catchy wordplay and hard-hitting beats has projected him to hip-hop’s elite. He’s been popping out banger after banger for years, and he shows no sign of slowing down. Especially after already releasing his second album of 2019, “Save Me.” One thing that really separates Future from his fellow artists is the replay value of his music. I’ve been listening to his songs for quite some time now, and they haven’t got old yet.
4. Travis Scott
Best Song: Pick Up the Phone (featuring Quavo & Young Thug)
Best Album: Astroworld

Imagine this. Take the musical genius of Kanye West, combine it with the production savvy of Kid Cudi and what you get out is Travis Scott.
Scott took no time in becoming one of the most prominent figures in hip-hop. If he isn’t the greatest artist of all time, he is by far the greatest stage performer. No one has even come close to having his stage presence. His concerts are notorious for the absolute madness and chaos that they cause, so much so that he was once arrested following a show for inciting a riot. His music is already tremendous, but hearing it live is ecstasy.
There’s no wonder that Scott has been so successful. A prodigy of Kanye West, he signed with West’s Good Music Label at the beginning stages of his career and has produced and collaborated with him on many occasions. Since then, though, Scott has been on a rampage to create his own lane in hip-hop. He has one of the most unique personalities in rap. From his sound to the way he talks and to his seemingly never-ending energy.  Scott will go down as one of the best to ever do it.
5. Young Thug
Best Song: Check
Best Album: Barter 6

When it comes to personalities, the “Thugger” has one of the biggest. His flamboyant, artsy lifestyle reflects not only in his fashion but also in his music. Thug doesn’t have as great as of a discography as others in the elite rap class. But when it comes to producing catchy, loveable tunes that stand the test of time, Thug is your guy. I have always been blown away by how effortlessly he creates these smooth, rhythmic tracks that leave your ears dumbfounded. Not to mention that he’s also an incredible singer. His song “Killed Before,” off of his joint album “Super Slimey” with Future, showcased his tremendous vocal abilities. It even had Lil Duval, among others, calling for a Grammy for best R&B song. He got my vote.
6. Migos
Best Song: Kelly Price (featuring Travis Scott)
Best Album: Culture

The first and only group on this list, the Migos have continued the legacy of legendary hip-hop groups like the Wu-Tang Clan and NWA that came before them. What I believe separates them from those other groups, though, is that they are all related. You can even hear it in their music. Uncle Quavo and cousins Offset and Takeoff never miss a beat. They complement each other so well, and their trademark ad-libs are just the cherry on top. “Splash!”
7. J. Cole
Best Song: Fire Squad
Best Album: Born Sinner

Kendrick. Cole. Kendrick. Cole. The debate may never end. I like to appreciate the best of both worlds.
J. Cole is a rare specimen. He’s not only one of the most talented rappers alive, he’s also one of the most relatable. A lot of rappers today like to boast about their luxurious or dangerous lifestyles that the average listener probably can’t relate to. J Cole’s lyrics talk a lot about the everyday struggles of the common man and issues that everyone went through during a time in their lives.
Many people will say he has one of the greatest albums of all time with “2014 Forest Hills Drive,” but I’m more of a “Born Sinner” type of guy. The reason why Cole falls to No. 7 on this list is that he can be a little predictable at this stage in his career. He doesn’t really have that “wow” factor anymore, and replay value of his music is not as high as others. Still, he’s a phenomenal talent and an all-time MC.
8. Big KRIT
Best Song: Banana Clip Theory
Best Album: King Remembered in Time

This is going to be the biggest head-scratcher for most people reading this list. KRIT is not a super well-known rapper. But he should be. KRIT is a strong-tongued, dynamic MC, and his lyrical ability is matched by only a few.
What really sets him apart from other new age rappers is that he has an old-school style to his music. The vibes to his music are so smooth and relaxing that he appeals to a wide range of listeners.
If you’ve got your great uncle riding in the slab with you, I highly recommend giving KRIT a play.
9. Mac Miller
Best Song: The Question (featuring Lil Wayne)
Best Album: Macadelic

Mac Miller was an incredible artist and such an underrated rapper as well. He could rap, he could sing and his flow was uncanny. His style was also unique, so it was hard to really compare him to anyone else. Unfortunately, he died last September at the age of 26. A month before his death, he released his final album, “Swimming,” that featured some absolute masterpieces. The album came out the same day as Travis Scott’s “Astroworld,” so it didn’t really get the recognition it deserved. If you haven’t heard it, give it a listen.
10. Gunna
Best Song: 3 Headed Snake (featuring Young Thug)
Best Album: Drip or Drown 2

The final slot was a tough choice. There are many great artists to choose from, but ultimately I landed on a slick, still up-and-coming Atlanta rapper named Gunna.
Gunna has only really been on the scene since 2016, but the reason he makes the list is his flow. He has the most fascinating flow of any rapper I’ve heard since Busta Rhymes. Give this man a hard beat, let him spit some flames over it and boom! Instant classic.
Keep your eye on this man, because he will probably be higher on the next top rappers list.
Honorable Mentions: Jay-Z, T.I., 21 Savage, Chief Keef, Rae Sremmurd, Lil Uzi Vert, Kevin Gates, A$AP Rocky, Meek Mill, Kid Cudi, Drake