District trustees onboard with single accreditation 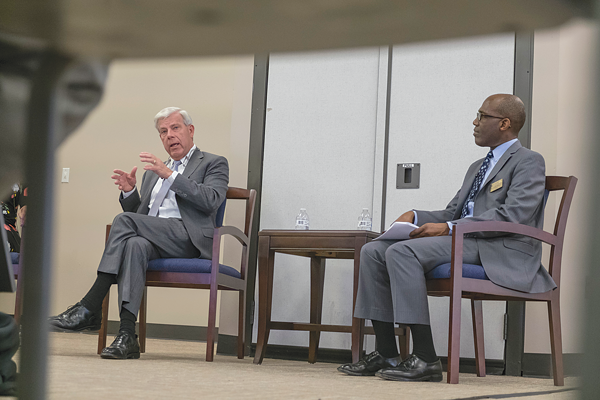 Chancellor Joe May’s initiative to “become one college” by switching to a single accreditation was approved by the Dallas County Community College District Board of Trustees at its Aug. 20 meeting.

May’s plan would allow all seven campuses to be accredited together, which would make it easier for “swirl students” — those who take classes at multiple campuses — to graduate.

“About 521 students enrolled today are ready to graduate, except they can’t,” May said at the Aug. 20 meeting.

Those students are unable to graduate, according to May, because a SACS rule requires them to complete 25 percent of their credits at one college. Single accreditation would eliminate this requirement.

The plan does come with challenges, including each school maintaining its separate identity and concerns over the amount of federal grant money each college could receive.

History professor Matt Hinckley is a supporter of the initiative and said having each college accredited separately gets confusing when the district is already considered a singular entity for state purposes, such as financing.

He said SACS is used as an argument by schools or groups of professors who are fighting against “meaningful reform,” as he called it.

“It’s not SACS that would say no to whatever this reform is,” Hinckley said. “It just means that we would have to get creative in how we would tell SACS how we would do it.”

Hinckley gave an example from about 10 years ago when the district was setting up the EDUC 1300 or “learning framework” courses. He said six of the seven colleges had agreed on a textbook and they also decided to include an “e-portfolio” that would allow students to place all of their work from their time in one place. He said it would have been useful for students on their college and even job resumes.

Due to a single group of professors at one college holding out, the whole proposition died.

“Part of the argument they made was, ‘We’re an independently accredited college. We choose to do it this way,’” he said. “And really it had nothing to do with accreditation. They just wanted to use a different book.”

By moving to a single accreditation, Hinckley said, similar issues wouldn’t be a problem.

Not all faculty members agree with the chancellor, though.

English professor Michael Morris said he does not support the single accreditation initiative for a number of reasons.

“It’s a very involved process and very complicated,” he said. “If you have one department or particular problem that holds things back, that holds back the whole school even if it only involves a small number of people.”

Morris said he worries that some of the more “dysfunctional” campuses will impede the accreditation process. He also said that he fears by going through this change the academic freedoms of professors could be compromised.

According to Justin Lonon, executive vice chancellor with the district, academic freedoms would not be compromised with the move to a single accreditation.

But there are other concerns.

“Each of our colleges have their own personalities, … and we don’t want to lose that through this effort,” Lonon said. “At the same time, since there are so many students that go to more than one college, sometimes it frustrates students that the information they get at one college is different at the other college they go to.”

Lonon said it’s unclear what will happen with federal grants.

“We got a chance to have some additional meetings and conversations with the Department of Education and some of the folks in Washington, D.C.,” he said. “We think there’s some specific designation that our colleges moving forward could be given as branch campuses that would still allow us to individually tap in to some of those grant dollars.”

There’s also concern about the possibility of restructuring leadership roles within the colleges and/or district.

“We don’t have all the answers right now,” Lonon said. “I realize that uncertainty brings unease. I expect there will be additional questions and concerns along the way, but so far everybody’s been very thoughtful and contemplative about it.”

Kim Chandler, vice president of planning, research and institutional effectiveness and liaison for SACS, said the district is working on putting together a written proposal to turn into SACS by Sept. 1. This would allow the SACS board to review it at its December meeting.

She said if the SACS board doesn’t come back looking for more information after its review in December, the district could begin to see change in the spring.

“There won’t be many changes in the sense of how we do our job and what that really feels like operationally day to day for those of us at the college,” she said. “I think there will probably be more collaboration between the colleges as we make decisions about how we offer programs or events and services.”