The Et Cetera • May 8, 2019 • https://eastfieldnews.com/14819/life-arts/photo-essay-defining-the-fairytale-sacrifices-struggles-and-independence/ 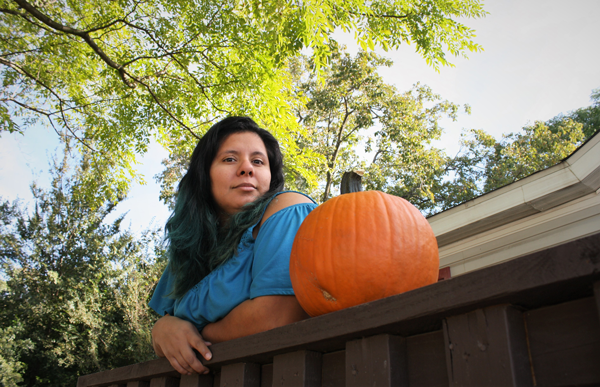 Mia Cuevas graduated from Eastfield May 4 after after surviving homelessness twice. Mia and her husband Jacob live with their five children in Seagoville, Texas, and it is time for their oldest daughter, Angelica's quinceañera. Photo by Kate Arrows Enoire/The Et Cetera

By Kate Arrows Enoire
@theetcetera
Hermila Cuevas, 32, had a rough and unstable childhood underscored with isolation and paternal abuse. She met her future husband Jacob when Mia was 14 and Jacob was 17 years old, and two years later, they were married with their first child, Angelica. Fifteen years later, after surviving homelessness twice, they live with their five children in Seagoville, Texas. They gave Angelica her quinceañera in December 2018. Neither Mia nor Jacob’s families had ever thrown a quinceañera before then.
In Latin American cultures, a quinceañera is a celebration of a young girl’s transition into adulthood at her 15th birthday. While the family has continued to struggle financially and juggle bills, Mia is proud to be the first to provide the celebration in their families. Her most important goals are to provide a nurturing environment for her children and to set an example for them to be independent and goal-oriented.
“A lot of parents don’t allow their daughters to decide what to have for their quinces, but we see this as Angelica’s first opportunity to show that she is growing up, so she made all the choices for the party — the colors, food, invites — and if she didn’t want a quince, that’s okay, too,” Mia said. “It’s our way of teaching her about understanding sacrifices, consequences, independence and letting her make her own decisions while starting something that our children can pass through generations.”