The Et Cetera • May 8, 2019 • https://eastfieldnews.com/14786/opinions/graduation-errors-expose-ineptitude-in-communication/ 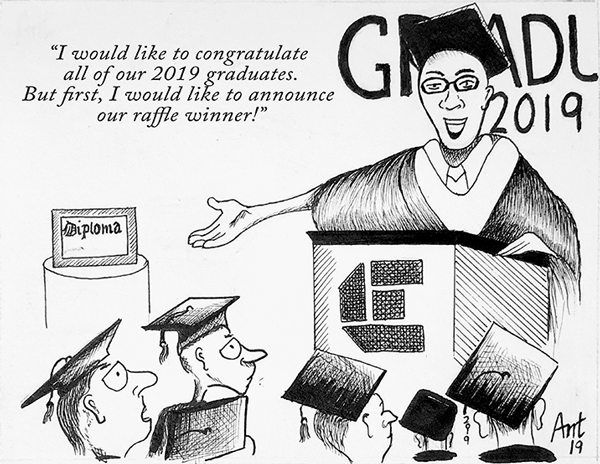 For a college administration that prides itself on transparency and open communication, waiting until three days before the commencement ceremony to release an official statement about the graduation ticket mix-up was unacceptable.

Several errors at the Admissions Office led to graduation guest tickets not being distributed properly. Using an app to disseminate your message instead of your marketing department or a mass email shows poor judgement. Many students may not have known the college was attempting to fix the issue.

Administration released their statement about the issue only to The Et Cetera, not the public.

Whether this was because of fear, embarrassment or a lack of public relations skills, we aren’t sure, but we know graduation wasn’t handled this way in the past. It shouldn’t be handled this way again.  Having a long line of students collecting guest tickets for graduation would’ve been a better decision than mailing tickets.

For many graduates, those who are non-traditional students, first-time graduates or students who don’t plan to pursue anything beyond an associate degree or a certificate, this could have been their only chance to walk the stage. The ticket error and the lack of communication were disrespectful to the graduates and those who pushed them to focus and finish.

Was the administration not contacted immediately about the blunder in distribution? This reinforces the stereotype of an administration that is out of touch. Before administration released a statement to The Et Cetera, an announcement was made on the Eastfield app offering a raffle where students could win a diploma frame and more six to 10 weeks after the end of the semester for returning extra tickets.

The communication issues might not be administration’s fault, though. The Admissions Office posted on the app that students should email them for assistance.

Many students never heard back. Students did receive a mass email about the diploma frame winner, of course.

Students aren’t stupid, though. Instead of turning in their tickets for a chance at a diploma frame they won’t receive for at least a month and a half, many students sold their tickets on the app for anywhere between $20 to $60.

The college clearly failed its students and community on multiple fronts. We have suggestions to improve.

The number of tickets given out should be determined by demand and availability of seats, after the registration period ends.  Don’t mail out the tickets. Have students pick them up with a deadline. It forces the students to be responsible for the distribution.

With the growing number of early college high school graduates, the ceremony is becoming too long. Just look at how many graduates walked out mid-ceremony. Once ECHS enrollment grows large enough, we suggest having a separate commencement ceremony for them.

Don’t rely on the app for communicating with the student body. Even if not every student reads it, a mass email would’ve been appreciated. Keep the promises you make. If you tell students to email you for options regarding the ticket situation, please email them back.

Perhaps being more person-centered and communicating with the community at large would’ve served the college better during this ordeal.