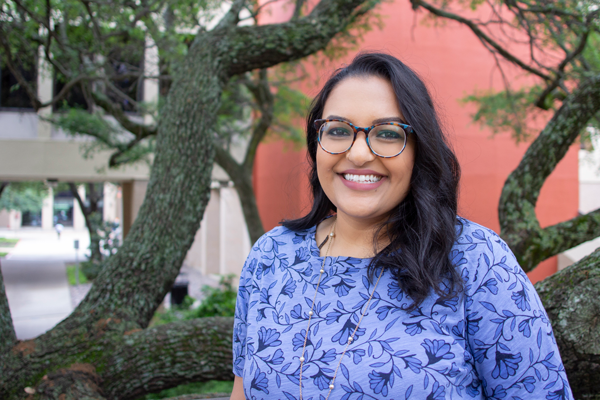 Ashmi Patel, director of the Center for Equity, Inclusion and Diversity at Eastfield, sat down with News Editor Skye Seipp. She grew up in Garland and got her bachelor’s degree in religious studies from SMU and later got her master’s from Rutgers University.

She is a practicing Hindu, which allowed her to work an internship at the American Hindu Foundation and to be an editor for Brown Girl Magazine. She moved from Washington, D.C. in November to start working at Eastfield.

What exactly is the Center for Equity, Inclusion and Diversity?

What we want the center to do for Eastfield is to create programs and resources for students so we can enhance their intellectual and social development, but really to eliminate the barriers that keep them from getting access to things that keep them from being successful when they come here. And we also really aim to create this culture of inclusivity and a welcoming community that cultivates to diversity but creating that to advance learning and advancement for anyone that comes to this college.

Then we also house the food pantry. We recognize that food and security is a big barrier to students being successful, so the pantry is an easy way to provide that resource to anyone that would need it. We also will eventually house other resources for students to come and get the help they need to be successful here.

We just hope that this center can model and create this culture on campus that is similar to the pay-it-forward model, but also provide educational opportunities. We’re doing some professional development and other student programming to create this awareness. I think there’s a lot of fear around this subject, saying the wrong thing or maybe offending somebody. I think the best way to get past that is the introspective side, but also educating yourself.

Do a lot of other community colleges already have something like this established?

What have your personal experiences been with equity, inclusion and diversity?

I was pretty consistently asked if I was a red-dot or a red-feather Indian [as a child]. There weren’t many Hindu kids either… I think experiences that I never fully internalized or made sense of it until I was much older. As a kid, I definitely had a happy childhood, but when you get older you’re like ‘Hmm that wasn’t very nice or shouldn’t have been said to me.’

What has had the biggest influence on your life and inspired you the most?

“The Alchemist” is one of my favorite books and I read it once a year, or I try to. It’s hard to describe what it’s about, but the reason I like it is that it’s a little abstract in the way that it describes the universe. At the end of the day, the message is that if you want something bad enough the universe will help you get it. You just have to keep believing in it. If you work toward something for a long time, then the failures or downfalls can pile up.

Sometimes you have to remind yourself that life is really long and you should focus on the good things that are piling up. That’s one of the books that helps me do that because I try to dwell on the positive parts. I think that the best way to move forward is to know that there’s always hope.

I saw you did some work with the Aspen Institute. What did you do there?

The institute is a nonpartisan think tank and they have about 40 different programs…The program I worked for was the college excellence program. We did higher education reform, predominantly in the community college sector, then we did do some four-year work.

That gave me a national perspective into what working for a community college could be, how it’s a hub for the community because it partners with K-12, but it also partners with the business sector. My primary project when I was there was the Aspen Presidential Fellowship. In about the next 10 years around 79 percent of community college presidents plan on retiring. That’s a huge gap to fill…It gave me a really good perspective on the importance of leadership for cultural change.

And that’s what gave you a background in being able to come here and setup the Center for Equity, Inclusion andDiversity?

Yeah, I think I had a lot of space to learn different things and work with different partners while we were at Aspen and meet really powerful leaders. I think the thing that spoke to me the most was the equity piece and how equity really is underlying in every piece of the institution because we want to serve our students, but we want to make sure they are all getting the outcomes that they deserve. That just kind of ended up being what I wanted to talk about all the time and learn about. So when I saw this position I was super excited.

What made you choose to move back from Washington, D.C.?

When I moved to D.C. I knew wanted to do my work and get this experience and perspective. I really wanted to get a different [and] national perspective, but I always knew that I would come back. I definitely wanted to come back locally and serve the community that I grew up in.

I’ve always felt a responsibility for helping the community that helped me. And my entire family lives here, so I came back earlier than I thought, just to be closer to my family.

You told me progress is slow and you have to be committed to making a change. How do you relay that message to other people?

Well one, I have to remind myself of that all the time. Especially when you believe in something really strongly, it’s often difficult to have the patience to see it come to fruition, as slowly as it might take. I haven’t fully figured it out.

I think it’s a journey for myself to remind myself that progress is slow and on the days when you feel you can’t change anything, you have to remind yourself that you’ve at least changed it for one person. Obviously, I would want to just one day be able to change it for thousands or millions of people, but if I can at least change it for one, then that’s a good start.

And that person will at least pay it forward. I guess my long answer to that is that I’m still figuring it out.