Changes to board policies leave some faculty vexed 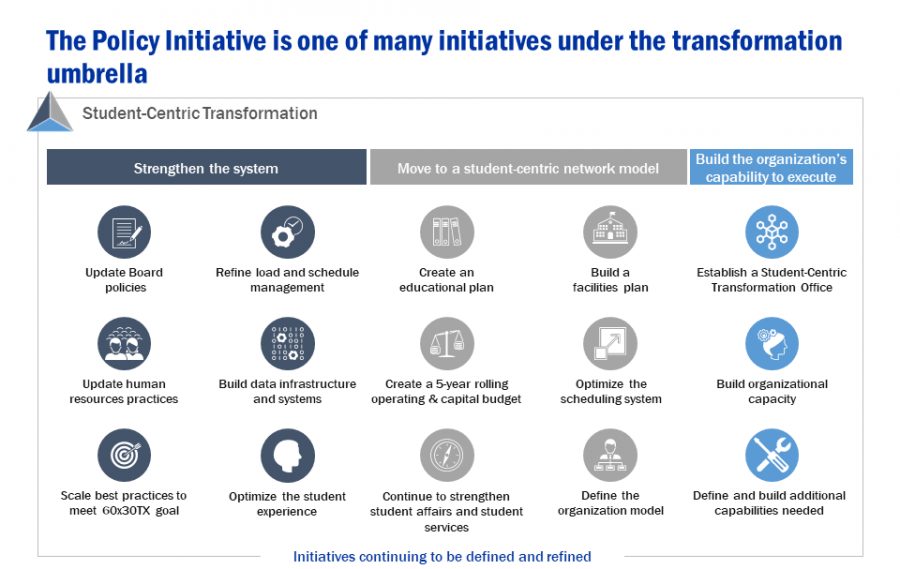 Faculty have until the board votes on June 4 to voice concerns about proposed policies aimed at creating “clear, consistent and equitable changes” across the Dallas County Community College District.

Justin Lonon, executive vice chancellor, said the goal was to evaluate inequities that exist across the district that may affect faculty compensation.

“It’s our hope that aligning us as a district and getting us all on the same page will help us address these inequities,” Lonon said. “And as we move into this work further we’ll be taking a deeper look at load and management issues.”

A draft of the modifications was sent out faculty and staff  April 12, read to the board May 7, and will be voted on by the board June 4. These changes are not expected to take affect until fall 2020.

This initiative consists of nine policy changes recommended by the Boston Consulting Group, who after being granted a $1.5 million contract investigated some the findings of the DCCCD Faculty Load Review Group from 2016-2017. After completing their assessment, the consultants aligned with the group on many issues and found other inequities.

The nine proposed changes are: defining a faculty member’s requirements (load) by time spent in instruction (contact hour); make lecture and lab contact hours equal; clearly define what extra service maximums are; define and consistently apply institutional services (time spent grading papers and other duties that come with teaching) and release time (for faculty members in administrative services and need to be released from their regular workload); give a clear definition to part-time faculty requirements; determine course capacities across all disciplines by teacher recommendations; give faculty members teaching an under-enrolled required class full value and finally defining and standardizing compensation across the district for large group instruction.

Faculty Association President Liz Nichols said faculty were initially concerned about cuts to extra service maximums and angst about the language used, as they felt blame for problems in the district was solely being pushed on them.

“I think a lot of uneasiness and fears could have been addressed way earlier,” she said. “We’ve played some catch up, but I feel good about the relationship that’s been forged between the council and the Boston Consulting Group.”

Nichols, along with the other faculty association presidents across the district, has been meeting with DCCCD Chancellor Joe May once a month to discuss the policy changes and to voice concerns from their constituents. She also said they meet with members from the Boston Consultant Group multiple times a month.

If these changes are approved, the next step will be to set up a number of task forces across disciplines consisting of faculty and various other staff members to begin implementing the policy changes. The policy change is one of 15 initiatives in the district’s Student Centric Transformation and falls under the “strengthening the system” category of the plan.

Nichols said she has tried to keep faculty up-to-date on the changes as they’re happening by sending emails and pushing people to the website to give their feedback. She also set up a meeting for faculty with three Boston Consulting members on April 18, where about 20 out of 153 faculty members attended.

The board approved $1.5 million contract to bring on the Boston Consultant Group Dec. 4 to investigate inequities throughout the district.

Government professor Glynn Newman said  the issues could have been solved internally without the help of the Boston Consulting.

“When you’re making a big decision like this you need to know information upfront so you can somewhat hammer through the minutia and figure out if it’s good or not good for you,” he said. “The information that they provided, more and more came out over time, but closer to them making a decision versus us being able to prepare a rebuttal.”

Newman said he does believe that equity is needed across the district, but said each situation should be evaluated on a case-by-case basis.

While the Boston Consulting Group has been the lead investigator in addressing discrepancies, many of the proposed changes come from work done by the Faculty Load Review Group back in 2016-2017.

The group was a team of faculty, deans and staff from across the district that investigated inequities among faculty in relation to load requirements. The final review was sent to Chancellor Joe May in May 2017 and found the most urgent areas that required attention were inequities among lecture and lab loads, class size inconsistencies and inequities in how release time was awarded to faculty members.

History professor Matt Hinckley was one of the leaders of the Faculty Load Review Group and said that many of these changes are good for faculty across the district.

He said he understands why May brought an outside group to validate the findings of the Faculty Load Review Group  report.  And after reading the draft said it appears the Boston Consulting has confirmed many of their initial findings.

“If I had had my way, everything would have been implemented by now, but that’s not how it works,” he said. “There’s a lot of money that will have to be spent to make this [policy change] happen. They’ll probably have to hire a lot more full-time faculty around the district and that costs money.”

He also said the board has to be cognizant of taxpayer dollars being spent before big changes are made and by bringing in an outside group they’re able to verify the findings of the Faculty Load Review Group.

Faculty voiced concerns about the policy changes at town halls and forums back in March, with one of the biggest worries being that the extra service maximum of 14.7 contact hours (or four additional classes) would be cut in half. May said that suggested change would not happen.

The current draft does not propose changes to extra service maximums, instead it proposes clearly defining the current 14.7 maximum as contact hours.

The 14.7 contact hours have been interpreted differently across campuses, with some defining it as credit hours and others as clock hours.

However, Eastfield defines it as 14.7 contact hours per week, which under the draft will be the proper definition. Extra service maximums means that in addition to the five classes that faculty must teach to get 100 percent of their load, the extra 14.7 allows them to teach another four classes per regular semester.

With relation to the changes to lab and lecture, biology professor Pebble Barbero is glad to see change coming.

“Instead of being in class for fifteen hours, we’re in class for eighteen hours,” she said. “In essence we’re teaching an extra class a semester. By making lecture and lab equal, we will have the same five classes for our load and that sixth one would be compensated for.” The current policy gives professors who teach a lab a lesser percentage to count toward their load. Where most teachers have to teach five three-hour classes a semester (each class is 20 percent of their load), professors who teach a lab don’t receive the full 20 percent.

Inconsistencies in how release time is defined and awarded is another problem found among campuses.

The draft suggests changing the name from release to reassigned time and clearly defining what that means. The draft does not define it however, as that will be the job of the task force. Release time is offered to faculty who partake in certain institutional services, like for Nichols being the Faculty Association president. The policy states that faculty who partake in services like this are released from their duties of teaching for however many classes it will take for them to oblige to their other duties pertinent to the district or campus.

However, campuses across the district give different incentives to faculty instead of release time. Some give contracts or stipends to their faculty.

Hinckley said this can be problematic because it’s hard to determine if all faculty across the district are being equally compensated.

Course capacity and determining what constitutes as a large group are two other issues of inequity that were found. It’s suggested that course capacity be established by recommendations from faculty of that discipline across the district.

Large group instruction doesn’t have a standard on what constitutes a large group, and some faculty receive more or less money when they teach groups based on what their campus deems as a large group.

One example found in the Faculty Load Review Group report was with Richland and Cedar Valley. At Richland, some history classes can seat 55 students, and the faculty member who teaches that class is awarded more money. At Cedar Valley, a teacher who has a class of 48 students gets two contracts for that class, meaning they make more money than the professor at Richland.

“From course to course and discipline to discipline it may vary,” Hinckley said. “And that’s OK. And what the Faculty Load Review Group suggested is that faculty discipline determine what’s an appropriate class size.”

Nichols, Hinckley, Newman, Barbero and Lonon all agree the board will likely pass the changes.

Barbero said when the policy changes were first announced she was leery of them like many other faculty members.