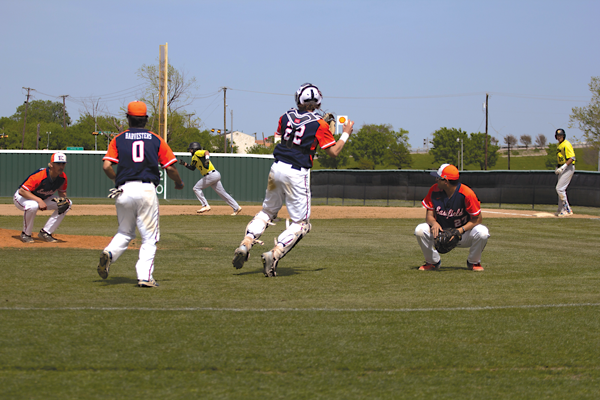 Catcher Ryan Dempsey throws to second hoping to get an out in Eastfield’s April 12 game against Brookhaven. The Harvesters lost the game 8-6. Photo by Yesenia Alvarado/The Et Cetera

With three weeks left until the postseason, Harvesters baseball head coach Michael Martin said inconsistency in all areas has been a plague to the team this season.

“There haven’t been very many highlights,” Martin said. “We’ve been really inconsistent going out and playing weekend to weekend. Last weekend we played really well against North Lake, who is leading our conference, and we had the chance to win three games. Then we came out this weekend and didn’t play very well.”

Martin said the team has had trouble making adjustments at the plate and on the mound. He said there haven’t been any memorable things this season, at least “not in a good way.”

“Every game’s a challenge for us right now,” Martin said.