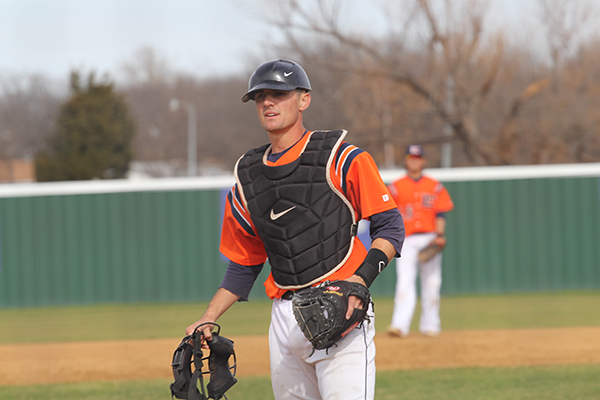 Eastfield catcher Taylor Empkey, who has a .404 batting average, holds Bible study sessions with teammates at his apartment.


By ANAHI PEREZ
From catching to hitting to preaching the word of God, sophomore catcher Taylor Empkey leads the Eastfield Harvesters baseball team on and off the diamond.
Empkey’s .400 batting average and 25 runs batted in have helped the Harvesters compile a 21-4 overall record and win their first two series against conference opponents.
But for Empkey, life is about more than baseball.
Empkey, who is a member of the Fellowship of Christian Athletes and Athletes in Action,  has Bible Study sessions with a couple of his teammates in his apartment.
“I’m really strong on my faith,” he said. “I love Jesus a whole lot, and I like to talk to the guys about their faith. Athletes in Action helped bring the soccer, baseball and basketball teams together in terms of faith, but also helped to create a bond.”
Assistant coach Travis Graves said he is impressed with Empkey’s leadership.
“He’s great, wonderful,” Graves said. “That kid has more energy than anybody out there. He catches in an intrasquad practice for three-and-a-half to four hours, and he’s the first one to grab a rake to rake home plate. I mean that’s the type of kid he is. He just goes, goes and goes.”
Although Empkey considers himself a normal guy, many of his teammates and coaches admire his personality.
“He’s one of our better players, and he’s having a really good year so far,” said head coach Michael Martin. “He’s a great example to these kids.”
Sophomore pitcher Will Birge worked with Empkey last year and said the two have become good friends outside of baseball.
“He’s a good teammate,” Birge said. “He’s strong in his faith. He makes good grades, works hard. He is what you want in a friend, and we all have a tremendous amount of respect for him.”
Empkey said an important part of playing catcher is managing the pitching staff. Since every pitcher has a different way of throwing the ball, Empkey said he has to know what each one is going to throw to him. With practice, he learns about pitching strengths and how to command the game.
Empkey said he tries to make the pitchers as comfortable as possible on the mound, instead of feeling stressed.
“I usually go up there and try to lighten the mood, and try to talk to them,” he said.
One tactic Empkey uses is asking the pitchers whether they prefer chicken or steak. He said it helps relax them.
“It gets them thinking about food,” Empkey said. “Although many of them say steak, I ask ‘Is that fajitas?’ or ‘How does that look for you?’ It’s a lot of fun.”
When he’s not in Mesquite, Empkey spends time with his family in Fort Worth. Whether it’s catching baseballs or catching up with his 14-year-old brother, he tries to leave his mark on the people he encounters.
“He is definitely a player with faith,” Birge said. “He walks the walk, talks the talk. I respect Taylor immensely for that.”
Empkey  grew up playing various sports including football and basketball, but baseball has always been his first love.
When Martin saw Empkey playing for L.D. Bell High School, he and Graves knew he would be a great fit for Eastfield.
“He’s a good player,” Martin said. “We could tell that from the start. Being a catcher is an important role on the team. There are only two people that touch the ball every time. The pitcher is throwing to the catcher. That’s a pretty important job, and he’s handled it well for us.”
Delete Image
Align Left
Align Center
Align Right
Align Left
Align Center
Delete Heading