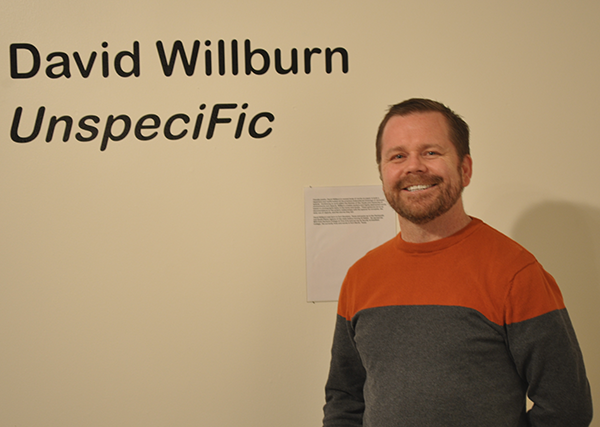 
By Emma Hahn
Meet art professor David Willburn, a man of complex humor and an artist with an eye for beauty in the most common things, such as a coffee pot or a television remote.
Willburn’s most recent work is currently on display in room F-219, the campus’ small art gallery.
The art displayed in “UnspeciFic” is subtle, abstract and very minimal. Willburn doesn’t have to smear paint over a canvas to make beautiful images. Small lines of pen or pencil move freely on the paper, turning and contorting into unfamiliar shapes. Bits of foam and cloth are glued on some of the works to add a 3D effect.
What the pictures portray is not entirely clear to the viewer, but it stirs a sense of longing to know what the pictures mean.
When asked what inspired his work, Willburn said he looks at the world around him and creates art that describes what he sees.
“My work is motivated by a desire to investigate how people inhabit domestic space,” Willburn said. “All of my work has been about the idea of domesticity and the rituals that occur within one’s home environment.”
He said before this exhibition, most of his works were realistic drawings of spaces in a home with embroidery stitched onto pieces of paper.
“In this new work, I’ve taken that exact same type of information and highly abstracted it,” Willburn said. “So, it’s there for me, that motivation and inspiration, it’s just been visually altered.”
Iris Bechtol, Gallery Director, describes Willburn’s personality as quiet, yet exuberant at the same time. His face lights up as he explains his work, and his hands are constantly moving to capture ideas that can’t be expressed in words.
Bechtol said the reason for Willburn’s solo exhibition is that he is leaving for a sabbatical in the fall.
“He’ll be focusing on his work and studio, and not teaching,” Bechtol said. “Sometimes it’s good to acknowledge that the faculty, who spend all of this time in the program, are practicing artists too.”
Art professor Kathy Windrow taught Willburn when he attended Eastfield as a young adult. He was a student in several of her 2D design classes.
“He was a character from the very beginning, so he stood out in my class.” Windrow said. “He was very serious, and he did all of the work brilliantly, with this kind of quirky sense of humor.”
Windrow said her relationship with Willburn grew into a long-lasting friendship.
“He is one of my top favorite people in the world that I have ever met, which is saying a lot because I’ve been on the planet for a long time.” Windrow said. “He is an amazing individual. There is no one else like David Willburn.”
Delete Image
Align Left
Align Center
Align Right
Align Left
Align Center
Delete Heading