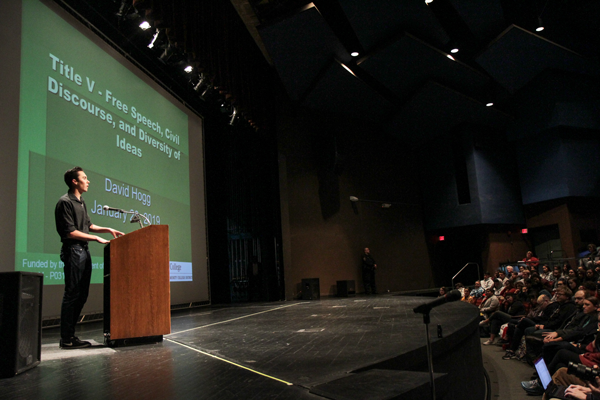 Gun control activist David Hogg said his fight for gun control has not been an easy journey. He has been called out by name, accused of being a paid crisis actor and had difficult conversations with Second Amendment advocates, he told an audience at Brookhaven College on Jan. 29.

Hogg is one of the survivors of the 2018 mass shooting at Marjory Stoneman Douglas High School in Parkland, Florida, where a lone gunman killed 17 students and employees. Following the shooting, Hogg took his experience in broadcast news classes and used it to help begin the March for Our Lives movement.

The troubles for gun change come not only from the National Rifle Association, Hogg said, but also from a “racist media” institution that will not cover gun violence in minority communities the same as in white communities and politicians that “don’t care about our lives” as much as they care about being re-elected.

Hogg said to fight the NRA and corporations, students should run for elected office without taking money from any special interests.

Hogg, who said he sought out media attention following the shooting to raise awareness of gun violence, wants other young Americans to use their voices and their votes to effect change.

Hogg said he does not want to take guns away from anyone who is not a domestic abuser, terrorist or a risk to themselves. But later, he said rifles are not necessary for self-defense.

“If you’re shooting at someone who is several hundred feet away, you are not defending yourself,” Hogg said. “You are hunting that person.”

Collingwood said that in 80 percent of illegal activity involving guns, the firearm was obtained illegally.

Hogg disputed this claim, saying the statistics were falsified.

The last government survey of this data was conducted in 2004. The Johns Hopkins Center for Gun Policy and Research used this data and found that 31 percent of offenders who used a firearm in the commission of a crime could legally own a weapon. In the 13 states with the lightest gun ownership regulations at the time of the survey, 40 percent of guns used in a crime were obtained illegally, according to the study.

Daniel Webster, director of the Johns Hopkins Center for Gun Policy and Research, told Politifact that 60 percent of crimes involving a firearm were committed using an illegally obtained firearm in the other 37 states with stricter gun laws.

Another 2004 study conducted by the U.S. Secret Service and the Education Department found that 68 percent of school shooters used guns they obtained from home or relatives’ homes.

More recent statistics found that the United States was home to 37,200 firearm homicides in 2016, according to the Institute for Health Metrics and Evaluation at the University of Washington.

Collingwood believes that the key to curbing the number of violent crime incidents involving a gun is in fixing societal issues.

She does agree that background checks are necessary but does not agree with Hogg’s hopes of banning some long rifles and certain “high capacity” magazines.

“I think just as much or more effort needs to go into the societal issues, because that’s where it stems from,” Collingwood said. “I think there’s been this been cultural shift, specifically in the last 15 to 20 years where the need for a strong familial background is just gone.”

Hogg said that equally important to creating stricter gun laws is enforcing them.

Others, like mortuary science major Mickey McMillan, were inspired by Hogg’s speech.

“It’s kind of hard to start something by yourself, so it’s crazy that you’ve come this far,” McMillan said. “We’re really proud of you to come this far, and with everything you’ve been through it’s really amazing that you’re standing up and saying this is not OK.”

Hogg declined to take credit for the movement.

He suggested students at Brookhaven start a March for Our Lives chapter and emphasized the power of small groups of students fighting for what they believe in.

Gabby Azzari, a Venezuelan international student at Brookhaven, asked how non-citizens can get involved in government.

“We cannot vote, so what can we do to make change?” she asked Hogg. “To change the gun stuff and all the things in this country we don’t like.”

Hogg again emphasized the importance of voting, telling international students to encourage their friends to vote.

“Participate in their protests,” Hogg said. “You may have to be an American citizen to vote, but you only have to be a human to care about an issue.”

In addition to pushing for legislative change for guns, Hogg encouraged students to look to government to provide violence intervention in communities and at hospitals.

Intervention could reduce the amount of gun violence by giving youth something to do other than get involved in criminal activity, he said. One example he used was a free recording studio that allowed young people to make music to express their feelings in a non-violent way.